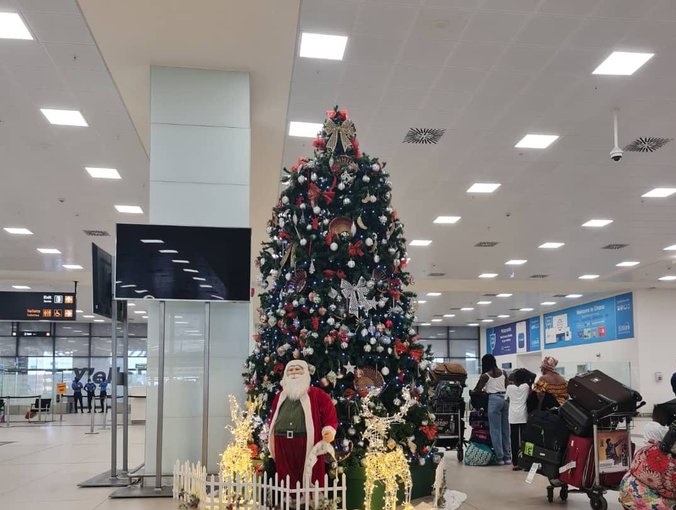 The decision by Ghanaian officials to spend some $19,000 on Christmas decorations at the country’s main airport, the Kotoka International Airport in Accra has sparked outrage among Ghanaians.

The Ghana Airport Company Limited (GACL) was reported largely by local media to have spent a whopping GHC 84,000 Cedis an equivalent of $13,625 to provide Christmas trees at the Airport.

The development reportedly left airport staff livid due to delays in the payment of their December salaries.

This has not go down well with some Ghanaians who took to social media to call out managers of the airport over the expenditure.

In a swift rebuttal though the Board Chairman of the Ghana Airports Company Limited Paul Adom-Otchere said the cost of the Xmas trees was rather GHC 34,000.

He disclosed that other decorations cost GHC 84,000 cedis out of which GHC 50,000 was paid through sponsorship.

According to Mr. Adom-Otchere, the total amount spent on the Xmas decorations was GHC 118,000 Cedis which is equivalent of $19,000.

He also stated that GACL staff were paid all their December 2021 salaries and bonuses contrary to the media reports.

Investigative journalist Manasseh Azure has described the response from the Board Chairman as a propaganda.

“What business has the chairman of a board got to do with the procurement of Christmas lights? Why would the company do that? Azure asked in a social media post.

Mr. Azure said Ghanaians must demand accountability on the use of state funds.

“we won’t respond to the childish weekly touch screen” jokes inspired by Jospognic demons, but when it has to do with how state resources are managed, we should all be interested, shouldn’t we?” he asked.