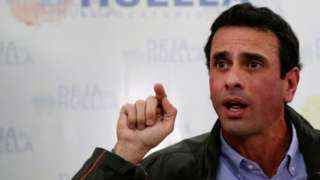 The Venezuelan opposition have accused the government of staging a coup by blocking their drive to hold a referendum on removing President Nicolas Maduro from office.

Election officials had suspended a petition needed to organise the referendum.

The move halted the recall vote that polls said the government would lose.

Henrique Capriles said the coup “had been carried out against all Venezuelans”.

He said in the protests, called for Wednesday, “we will take Venezuela from end to end. The whole people will be mobilized to restore constitutional order.”

Earlier the opposition said a court order had barred eight of them from leaving the country.

Reasons for the ban were not given but the council had said fraud had been reported in the referendum process.

The opposition had planned to secure the required signatures for the recall vote next week.

Another of the banned leaders, opposition coalition leader Jesus Torrealba, said: “It’s gratuitous aggression. We are the majority, in the street and in Congress.

“They cannot postpone the change that the country is demanding.”

The opposition controls the country’s Congress but says Mr Maduro has power over key institutions such as the electoral authorities and the courts.

The government has accused the opposition of inventing names on the first of two petitions required to endorse the recall vote.

Mr Maduro said there had been “a gigantic fraud”, adding: “Their cheating is coming out.”

Diosdado Cabello, also of Mr Maduro’s Socialist Party, said: “We hope justice will be served and that those responsible for this swindle will be detained.”

The decision to suspend the referendum process came despite intense international pressure on President Maduro from the US and other Latin American countries to allow it to go ahead.