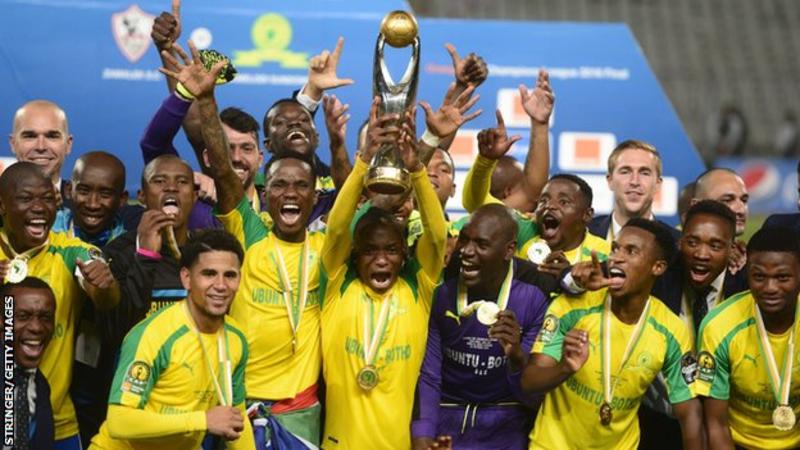 Mamelodi Sundowns held out after being under siege for almost 90 minutes to be crowned as the African champions for 2016 after restricting hosts Zamalek of Egypt to a 1-0 win in the second leg of the Champions League in Alexandria on Sunday.

It meant Sundowns won 3-1 on aggregate after a convincing first leg triumph in Atteridgeville last Saturday.

It was a first triumph for the South African club, whose only previous final appearance came in 2001 when they lost to Zamalek’s arch rivals Al Ahly.

Zamalek got their only goal after 62 minutes from Stanley Ohawuchi despite dominating the game and bombarding the Sundowns goal.

But stout defending and a little luck meant Sundowns were able to hold onto their healthy first leg advantage.

Zamalek came out itching to get back into the tie with Bassem Morsi gesturing to the crowd to turn up the volume as the game kicked off.

But it was Sundowns who got in the first effort of the night with their Zimbabwean striker Khama Billiat shooting over the top of the Zamalek goal in the fifth minute.

Zamalek should have been ahead in the 12th minute when Ohawuchi, only recently added to their squad, sliced through the defence but put his effort wide, catching Sundowns on-rushing goalkeeper Denis Onyango on the ankle in the process.

As a result of the injury, Uganda international Onyango was forced to leave the field on a stretcher not long thereafter, with back up goal-keeper Wayne Sandilands brought on after 28 minutes.

But he did not have to make a save until some 15 minutes later when a dive at the near post blocked a forceful shot from captain Ahmed Tawfik.

Zamalek kept up the pressure through the first half but met with solid resistance from a strong Sundowns defence and were always susceptible on the counter attack.

Billiat, Percy Tau and Anthony Laffor all had chances to score for the South Africans on the counter attack, particularly in the eight minutes that were added onto the first half for the lengthy delay when Onyango needed treatment.

In the second half, Zamalek’s Ramzy Khaled hit a free kick into the wall just after the break before Ohawuchi caught Sandilands out with a stinging shot from outside the penalty area.

Suddenly, by pulling a goal back, Zamalek began to believe and threw on two more attacking players in Emmanuel Mayuka and Shikabala.

But Mayuka had a header cleared off the line and Ohawuchi a headed chance saved by Sandilands as the South Africans held out for a famous win.

After saying that the crowd at the Borg El Arab Stadium would be restricted to just 20,000 for security reasons, Egyptian authorities obviously relented with the 86,000 capacity at least three-quarters full to provide a rollicking atmosphere.

Zamalek made four changes from the first leg with goalkeeper Ahmed El Shenawy and centre back Islam Gamal both axed after being criticised for the own-goal that the Egyptians gave away in Atteridgeville last Saturday.

Ramzi Khaled was brought in at right back to allow Ahmed Tawfik to push up in a more attacking formation that also included the addition of a third striker in Mostafa Fathi. Captain Shikabala was dropped.

But while the changes were necessary to allow Zamalek a more attacking approach, it was not enough to work back a large deficit.