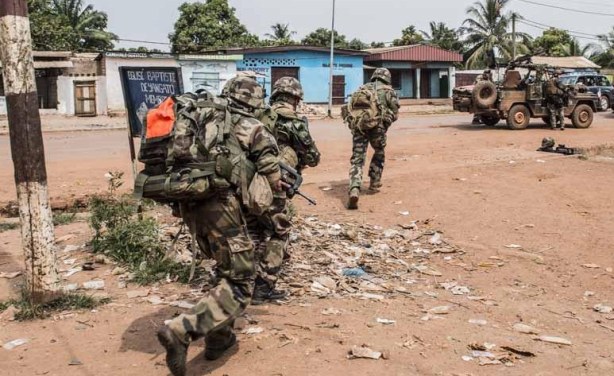 Armed militias were reported to be gathering in the Central African Republic (CAR) ahead of Monday’s withdrawal of French troops of Operation Sangaris, which started three years ago to halt bloodletting that followed a sectarian civil war.

French Defence Minister Jean-Yves Le Drian, who told parliament that the operation had “been a success” earlier this month, flew to Bangui on Sunday to declared Sangaris officially over the following day.

About 350 French troops, equipped with observation drones, are to remain in the country, 100 of them to be deployed with the 10,000-strong UN force, Minusca.

The 1,200 troops of Operation Sangaris were sent to back up the African Union’s Misca force as violence raged between Muslim Seleka and Christian anti-Balaka militias.

There are also vigilante groups made up of nomadic Fulani herders, who are predominantly Muslim, as well as others which specialise in highway robbery.

But the militias are reported to fear the French forces far more than Minusca, some of whose soldiers phone their own general staff before obeying UN officers’ orders, and armed groups are reported to be preparing to launch new violence.

Violence on the rise again

On Thursday and Friday at least 25 people, including six members of the security forces, were killed in clashes in and around the central town of Bambara, while 45 were killed in a displaced persons’ camp in nearby Kaga-Bandoro on 12 October.

On 24 October four people died during a shutdown of Bamako demanding Minusca’s departure – a movement alleged to have been organised by politicians close to Jean-Francis Bozizé, the son of deposed president François Bozizé, according to Le Monde newspaper.

“One reason why France is ending Sangaris is because it had committed its troops for six months and in the end they stayed for three years, so that’s quite a lot,” comments Roland Marchal at Paris’s CNRS research insititute. “And, of course, France may need its troops elsewhere, since it’s involved in Sahel, in Syria, as well as in France.”

Diplomats argue that the French mission was a bridging operation to allow the UN to take over but Le Drian was forced to admit that “stability has not completely returned”.

The French “didn’t really fulfil their mandates however,” says Marchal. “They were supposed to disarm armed groups and to have the country moving towards national reconciliation.

“But it became clear that disarming the armed groups would actually be a very hard task, and a costly one. And what was also needed was a legitimate government, so France chose to push for elections as quickly as possible, so that, with the support of the population, it would be able to take the tough decision. That is of course an illusion.”

The authority of President Faustin-Archange Touadera, who was elected in February, does not go far beyond Bangui and his government has a tiny budget of about 350 million euros.

A donors’ conference is to take place in Brussels on 17 November.

“But the crisis is deep, structurally systemic,” Marchal points out. “So you need radical change to be made to integrate more the countryside, and shut doors on corrupt elites of the region. And, if the government is not willing to do that, well then, of course, Minusca can stay but the French will be back in two three five years … who knows? But they’ll be back, because the crisis will continue, maybe change its shape again, but certainly become military again in a few years.”

The Sangaris force is the subject of three investigations into separate allegations of sexual abuse of children in the CAR.

In June, Paris prosecutors also opened a preliminary investigation into allegations that French troops beat up or stood by while others beat up two people there.