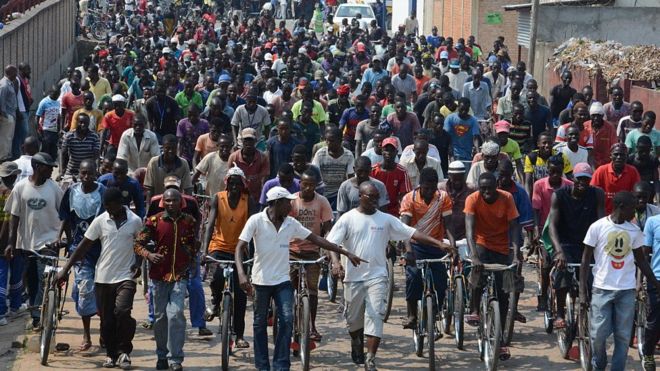 Cyclists and motorists in Burundi’s capital Bujumbura are being forced to pay parking fees for the first time.

This is the latest move by the government to raise money after Western donors cut aid to the poor central African state.

They were angry with President Pierre Nkurunziza for deciding last year to extend his decade-long rule, and cracking down on protesters.

The government has also scrapped free scholarships for university students.

It says they will have to repay tuition costs when they start working.

In the terms of a directive issued by city officials, monthly parking fees in Bujumbura would range from around $2 (£1.60) for a bicycle to $60 for a big lorry.

Buses, the main mode of transport in the city of about five million people, would have to pay about $6 a month.

The BBC’s Gildas Yihundimpundu in the city says that many people fear that the fees will have a knock-on effect, and the prices of goods will rise.

This is despite the fact that many residents battle to survive in a city where the average salary of a working person is about $80, he adds.

The European Union suspended direct financial aid to the government in March, saying it had not done enough to achieve stability.

More than 400 people were killed and 250,000 fled to neighbouring states following Mr Nkurunziza’s decision in April 2015 to run for a third term.

He won an election later that year, rejecting opposition claims that the poll had been rigged.

Last month, the government said Burundi was pulling out of the International Criminal Court (ICC), six months after the court’s prosecutor said she would investigate violence in the country.