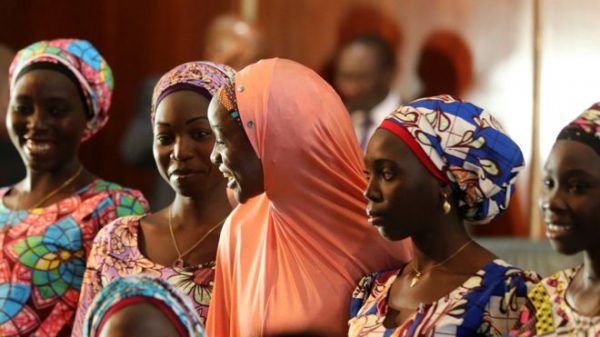 Ghana's chief justice, Kwasi Anin-Yeboah has gone into self-isolation in compliance with Covid-19 protocols. According to a circular to high court judges, the chief justice...
Read more

In our series of letters from African journalists, novelist and writer Adaobi Tricia Nwaubani looks at what lies ahead for some of the girls who have been released by Boko Haram militants in Nigeria.

To enable the 21 recently freed Chibok girls to avoid the stigma usually associated with Boko Haram captivity, a leader of Nigeria’s Chibok community has called for them to be sent to the US to continue their education.

But other dangers may await the girls if they travel abroad.

Some of the 57 Chibok girls who managed to escape a few hours after the Islamist militants stormed their school in April 2014 and ferried them away in trucks, are already being educated in the US.

Some of them told me how pleased they are about their former classmates’ release. They also considered it a good idea for the 21 girls to move to the US as they did.

“Maybe it will help them forget what they have been through in the past,” Patience Bulus said.

“They will not be scared here in America, and they will forget about what happened with them,” Kauna Yaga added.

But forgetting is one thing that these Chibok girls were not allowed to do until just a few months ago.

“Prior to May 2016, the support received was in exchange for telling and retelling their stories to the detriment of their mental, physical, academic and emotional wellbeing,” said psychologist Somiari Demm, who provided counselling to about 10 of these girls.

She described how they were subjected to constant media and other appearances for almost two years, which disrupted their school attendance and affected their performance.

During these public events, they seemed to be encouraged to embellish their stories of Boko Haram captivity for maximum effect.

Their narratives often elicited liberal donations, particularly in churches. The girls complained of having seen little of the funds raised.

“My conclusion is that the support provided to them has been tainted and their worth reduced to iPhones and iPads and a few dollars here and there,” said Mrs Demm.

Her persistent concerns about the girls eventually led to a collaboration between an NGO called the Murtala Muhammed Foundation, the Nigerian ministry of women affairs and the Nigerian embassy in Washington DC.

In May 2016, seven of the girls were removed from the guardianship of the Nigerian charity that had taken them to America.

“The girls were being used as tools for making money,” the Minister for Women Affairs, Aisha Alhassan, told the press after a meeting with the Chibok parents in Maiduguri.

Paul Ali, a father of one of the girls, also expressed his concerns: “From the information we are hearing, it seems they are not really studying in schools as we assumed.

“We understand that they are being used for show business… That is not what we wanted for our children.”

Emmanuel Ogebe, who heads the charity Education Must Continue Initiative that sponsored some of the girls in the US for two years, disputes this and says they were receiving a proper education and were being well looked after.

“I visited Chibok parents in the north-east, including Mr Paul Ali, and presented to him a photo album of his daughter’s scholastic and other activities,” he wrote last month.

For Mrs Demm, the point is that what the girls really needed after their escape was anonymity “to begin the healing process”.

She said they needed “to understand what fully happened, and develop the appropriate coping skills as they are reintegrated into society”.

Women and girls who were former captives of Boko Haram face marginalisation and rejection by family and community members because of social and cultural norms related to sexual violence.

“I am not so worried about the Chibok girls because I think there is a ring of support around them. Also, the Chibok community seem very aware, they might not face the same stigma,” says Fatima Akilu, a psychologist who used to run the Nigerian government’s deradicalisation programme.

But most of those kidnapped have had little attention or support when released, she says.

“We have thousands of girls who are much younger, held sometimes for far longer than the Chibok girls, and they are coming back to communities where they are not wanted because of their association with Boko Haram.”

There is also a growing fear that some of them were radicalised in captivity because of an increased use of female suicide bombers by the militants.

“Some of them are coming back pregnant and with babies, and the babies are being rejected,” Dr Akilu says.

According to the UN, their children are at a greater risk of rejection, abandonment and violence because of concerns they may have the “bad blood” of Boko Haram in their veins, and will therefore be a risk to their communities.

A different group of girls who escaped on the first day of their abduction was given full scholarships at the American University of Nigeria in the north-east state of Adamawa.

“Teachers began the work to build their academic confidence and skill levels,” he said.

“During the process of achieving academic success, the students are also involved in an exercise programme to relieve stress and have fun, social programmes to interact with each other and their teachers, and always have access to a psychological specialist if the need arises.”

Six of the escaped Chibok girls attending the programme have successfully enrolled into the university.

The president of the university has never allowed them to be paraded in front of cameras, Mr Braggs added.

Many media outlets have visited the university and spoken with them, but reporters agreed in advance not to ask the students about the trauma that occurred on the night of their kidnap.

“It was very important to stay away from that subject,” Mr Braggs said, “because it was very painful for the students to reflect on that issue.”

The 21 Chibok girls just released from more than two years in captivity may thrive in America if only their hosts realise that the girls are there to forget about their experiences, to further their education and not to become media stars.

Staying back in Nigeria may, in the long run, be less challenging for the girls than the re-traumatisation which may occur from overexposure.

Ghana's chief justice, Kwasi Anin-Yeboah has gone into self-isolation in compliance with Covid-19 protocols. According to a circular to high court judges, the chief justice...
Read more
Business

Kenya’s sports and culture minister Amina Mohamed will run to be the next Director-General of the World Trade Organization (WTO), a spokesperson said on...
Read more
Africa Feeds

A study on health reporting by Ghanaian journalists has won the James W. Markham top paper prize. The annual prize is given under the International...
Read more