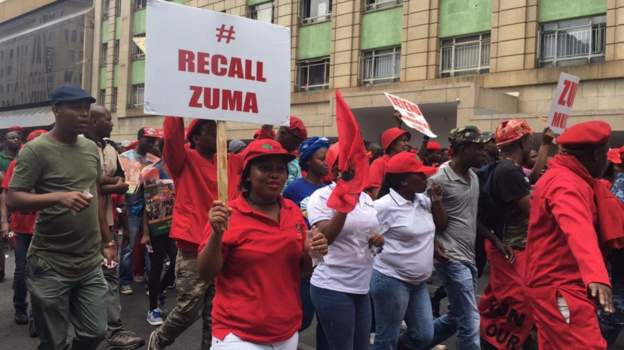 Police in South Africa have reportedly fired tear gas to disperse some protesters who marched to the office of the president, Jacob Zuma in Pretoria.

The protesters were demanding for Mr. Zuma’s resignation.

The protesters held posters with inscriptions like “Zuma must go” while chanting “fees must go” in response to unrest at universities around the country as students demand free education.

There have been reports of looting during the march in some central business districts.

There have been tweets from some of the protesters.

Found myself upwind from the teargas again. They fired it at #EFFmarch guys on the way to the Union Buildings #StateCapture pic.twitter.com/E1uhuEXidE

Looters breaking into a KFC near Scotts Corner #Effmarch pic.twitter.com/XyXn5yNvDl