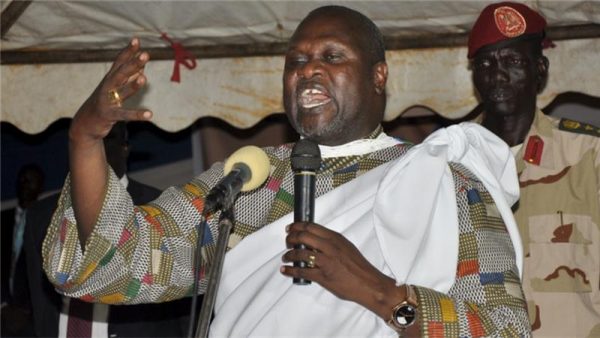 The spokesperson for Riek Machar, the former vice-president of South Sudan has been deported by the Kenyan government.

Mr Gatdet is also reported by the AP news agency to have been sent out of Kenya for posting comments on Facebook that supported the sacking of the head of the UN peacekeeping mission in South Sudan, Lt Gen Kimani Ondieki, a Kenyan commander by the UN chief Ban Ki-moon on Tuesday.

The commander was indicted by a UN report that stated that troops under Kimani Ondieke failed to help aid workers after their compound was attacked in July.

The AP reports that there are fears among rebels loyal to Mr. Riek Machar that the deported Gatdet Dak could face imminent death.

Mr. Machar in a statement condemned the deportation of his spokesperson.

He said “[In a] telephone conversation with the Deputy President William Ruto, I appealed that James Gatdet Dak should not be deported to Juba due to profound fear for his life. I also spoke to the Attorney General and attempted to speak with the Minister of Foreign Affairs.I alerted them that James Gatdet Dak was an urban refugee under the protection of the United Nations High Commission for Refugees in Kenya. Unfortunately, my appeal was ignored.”