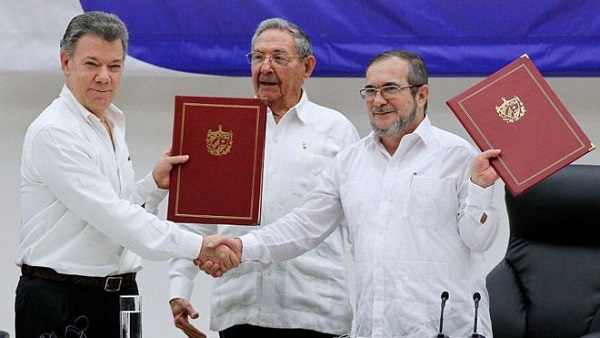 An earlier deal was signed in a triumphant ceremony – but voters later rejected it. Photo Credit: Getty

Colombia’s government says it will sign a new peace accord with Farc rebels on Thursday, after a previous deal was rejected in a referendum last month.

The new revised agreement will be submitted to Congress for approval, rather than put to a popular vote.

But opposition groups say it still does not go far enough in punishing rebels for human rights abuses.

The deal is aimed at ending more than 50 years of armed conflict, which has killed more than 260,000 people.

In a televised address to the nation on Tuesday, President Juan Manuel Santos said: “We have the unique opportunity to close this painful chapter in our history that has bereaved and afflicted millions of Colombians for half a century.”

The original deal was signed two months ago in an emotional ceremony before world leaders but it was rejected in a referendum on 2 October.

Government opponents led by former President Alvaro Uribe said the deal was too favourable to the rebels.

Farc and government negotiators worked round the clock to make more than 50 changes to make it more acceptable to conservative Colombians who despise the Farc.

Mr Uribe and other sceptics continued to claim the changes made were cosmetic.

The conflict between left-wing Farc guerrillas and the Colombian government lasted for more than 50 years and claimed the lives of more than 260,000 people.

So, many people were taken aback when Colombian voters last month narrowly rejected a peace plan drawn up between the two sides after four years of talks in Havana.

A formal ceasefire still holds, but there are worries there could be a return of nationwide violence and that a chance for peace could be lost for another generation.

Not holding another referendum will anger those on the right who say the new plan is too similar to the original version, but President Santos is hoping the nationwide desire for peace will override those objections.

President Santos has made clear there is no more room for negotiation despite Mr Uribe requesting a meeting with the Farc leadership to discuss his concerns.

“This new accord possibly won’t satisfy everybody, but that’s what happens in peace accords. There are always critical voices; it is understandable and respectable,” Mr Santos said.

He has said ratification would take place in Congress where the government coalition has a solid majority.

Mr Uribe had been pushing for another referendum which he said would vote down the accord again.

Mr Santos was awarded the Nobel Peace Prize in October for his efforts in bringing an end to the conflict, prompting speculation that the deal could still be saved.

Government negotiators say the peace accord needs to be signed urgently for fear that a delicate ceasefire could unravel unless implementation begins soon.

Last week two suspected Farc fighters were killed during fighting with security forces who said they mistook them for members of Colombia’s second-largest rebel group, the ELN.