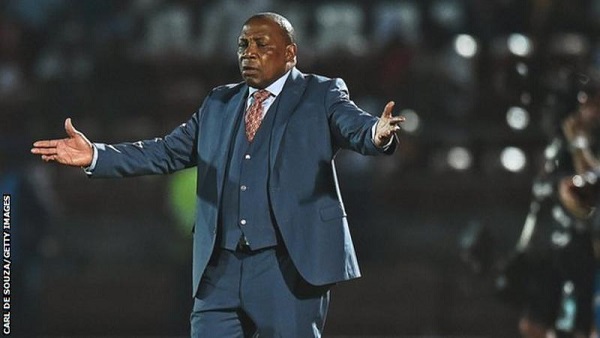 South Africa coach Ephraim Mashaba is charged by the country’s football association (Safa) and will attend a disciplinary hearing on 1 December.

All incidents came after South Africa’s 2-1 win over Senegal in a 2018 World Cup qualifier on 12 November.

Mashaba was suspended on 13 November.

He missed last week’s trip to Mozambique where Bafana Bafana played out a 1-1 draw with their neighbours in a friendly international in Maputo.

Attempts to organise a hearing since Mashaba was suspended by the association had been thwarted by the coach’s unavailability, the BBC has been told by Safa.

In terms of South African labour law, charges had to be presented to Mashaba, which he received on Tuesday.

He asked for time to consider them and gather his own evidence before his hearing.

South African media have speculated the hearing will lead to the dismissal of the 66-year-old, who has had two previous spells as Bafana coach.

Mashaba was a fall-back candidate when South Africa named him as national coach in August 2014 to replace Gordon Igesund, who miss out on World Cup qualification.

Safa had been seeking to reappoint Carlos Queiroz to the job but did not have the budget to entice him back to South Africa.

Within three months Mashaba was being widely feted as South Africa swept aside Nigeria and finished top of their qualifying group for the 2015 Africa Cup of Nations in Equatorial Guinea.

Mashaba went to the tournament in buoyant mood, telling the international media his side would win the title – but they were knocked out in the first round.

Failure to qualify for the 2017 Nations Cup, with Bafana finishing only third in their group behind Cameroon and lowly-ranked Mauritania, did not improve his standing.

After a 1-1 draw with Mauritania in the last of the qualifiers in Durban in September, Jordaan told South African television that Mashaba had to start winning again or face the sack.

Mashaba did not immediately react but the criticism from his bosses did not sit well.

A draw in Burkina Faso in the next game in October, at the start of the group phase of the World Cup qualifiers, left him still in the job and after Senegal, Mashaba vented his frustration and annoyance with those who had criticised him.