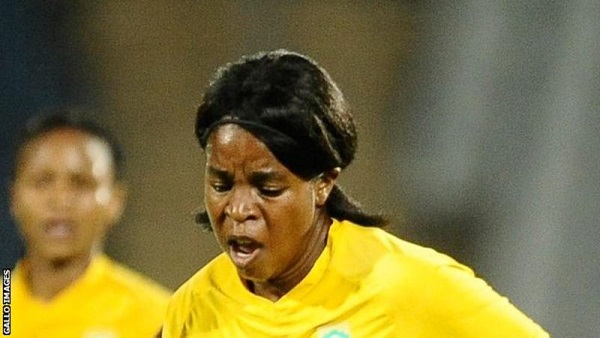 Banyana Banyana’s 5-0 victory made them runners-up to Group A winners Cameroon, who beat Zimbabwe 2-0 also on Friday.

The Indomitable Lionesses – hosts of the tournament – went into the game assured of their place in the last four and were comfortable against Zimbabwe as they kept up a 100% winning record.

In contrast, South Africa knew only a win would take them above Egypt, who started the match in second place with a two-point cushion over their opponents.

Banyana totally dominated the first half in terms of possession and territory and got their reward on 28 minutes when Mgcoyi scuffed home.

They continued to press after the break and on the hour mark scored twice in quick succession, Vilakazi cutting in from the right to slot in and then Jane finishing off a rebound to make it 3-0.

Seoposenwe added another with a powerful shot and Motlhalo completed the rout with a fine solo effort, dribbling round several defenders before finishing in style from the edge of the area.

Cameroon will stay in Yaounde to play the runners-up from Group B, which will be decided on Saturday – Nigeria, Ghana and Mali are all in contention. South Africa will stay in Limbe to play the winners of the group.

Both semi-finals are on Tuesday 29 November.