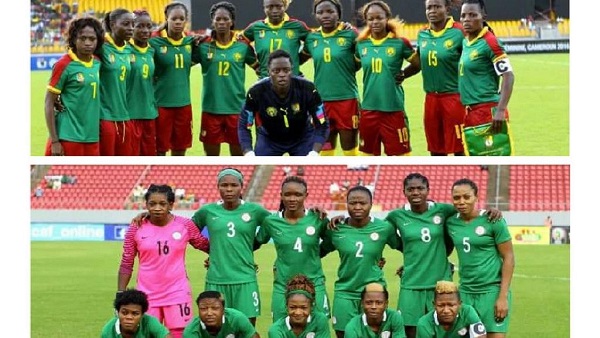 Cameroon’s Indomitable Lionesses will play Nigeria’s Super Falcons in the final of the ongoing African Womens Cup of Nations (AWCON) in Cameroon.

The Lionesses booked their place in the final with a 1-0 win over Ghana’s Black Queens. The win came from a goal on 71 minutes, when Raissa Feudijo finally scored after Njoya Ajara’s effort had been cleared off the line.

In the first half, Cameroon’s Aboudi Gabrielle Ongeune hit the post as the hosts dominated but there were few other chances. Cameroon could have made it two in the dying minutes of the game but Michelle Ngono Mani’s shot was tipped on to the bar and over.

The Super Falcons also accounted for the South African counterparts, the Bayana Bayana with a similar scoreline in the other semi final fixture that was played in the Stade Limbe.

Oparanozie Desire’s second half strike sealed the victory that set up the final fixture that will be contested in the capital Yaounde on Saturday. Both losing semi finalists will play in the third-place play off.

This marks the 10th edition of the AWCON which kicked off amid high expectations from Cameroonian fans. Their team placed second in the last tournament won by Nigeria in Namibia in 2014. Local football fans are hoping their team can claim victory on home ground.

This year the Indomitable Lionesses of Cameroon were in group A together with South Africa, Zimbabwe and Egypt. Defending champions Nigeria started their title defence in Group B with Mali, the other teams being Ghana and Kenya.