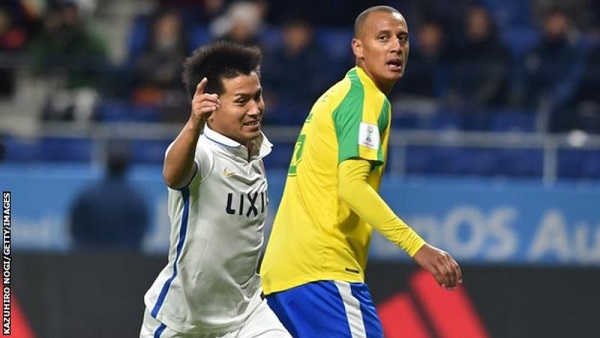 The African champions, Mamelodi Sundowns of South Africa, lost 2-0 to Japanese side Kashima Antlers in the quarter-final of the Fifa Club World Cup in Osaka on Sunday.

Sundowns were making their debut in this tournament having qualified for Japan after winning the African Champions League for the first time in their history in September.

But the South Africans’ hopes of progressing were dashed by two second half goals from Yasushi Endo (pictured) and Mu Kanazaki.

In the first half, Sundowns dominated and were at the heart of the action with their Zimbabwean star Khama Billiat coming close.

But Kashima, who beat Auckland City 2-1 in the tournament’s opening match on Thursday, were gifted their opening goal by Sundowns’ Ugandan goalkeeper Denis Onyango in the 63rd minute.

Latching onto a knock-down from Shoma Doi, Endo scuffed his left-foot shot which somehow squeezed under Onyango, bobbling out of his grasp and over the line, almost in slow motion.

Substitute Kanazaki killed the game off by smashing home from close range with two minutes left after more sloppy defending from the African champions.

“We played against a good team, they had their chances and took them, we didn’t take ours,” Mosimane said after the match.

Kashima, fresh from clinching their eighth J-League crown last weekend, will face Atletico Nacional of Colombia in the competition’s first semi-final on Wednesday.

Spanish giants Real Madrid are scheduled to arrive in Japan on Monday to face Club America of Mexico in their semi-final on Thursday.