Gunman opens fire at club in Mexico during music festival 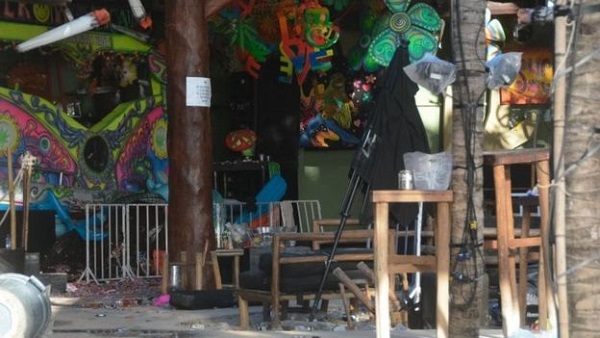 A gunman has killed five people at a club hosting an electronic music festival in the Mexican resort of Playa del Carmen, in Quintana Roo state.

Among those killed are two Canadians, an Italian and a Colombian citizen, Quintana Roo Attorney-General Miguel Angel Pech said.

The fifth victim was a woman who died in the stampede which followed the shooting, he said.

The shooting happened at the Blue Parrot club hosting the BPM festival.

BPM festival officials had earlier released a statement on Facebook saying that “a lone shooter” outside the Blue Parrot nightclub had shot dead four people.

They said three of those killed were members of the festival’s security team “whose lives were lost while trying to protect patrons inside the venue”.

Local police chief Rodolfo del Angel later put the number of dead at five and those injured at 15.

He told Milenio TV [in Spanish] that the shooting was triggered “by a disagreement between individuals inside the club”.

The festival, which is in its 10th year, is popular with foreign tourists, especially from the United States and the United Kingdom.

Valerie Lee, US editor of electronic dance and clubbing magazine Mixmag, was at the Blue Parrot when the shooting happened.

She told BBC Newsbeat that a security guard at first told her and her friends not to worry, that the sound was that of fireworks outside.

But when other people said they had seen a gunman, Ms Lee ran to a backstage exit and left the club.

Sidney Charles tweeted that he was DJing at the time of the shooting at the Blue Parrot.

Shootings in Mexican clubs are not unusual and are often linked to gang violence, but the venues targeted are normally those frequented by gang members rather than foreign tourists.