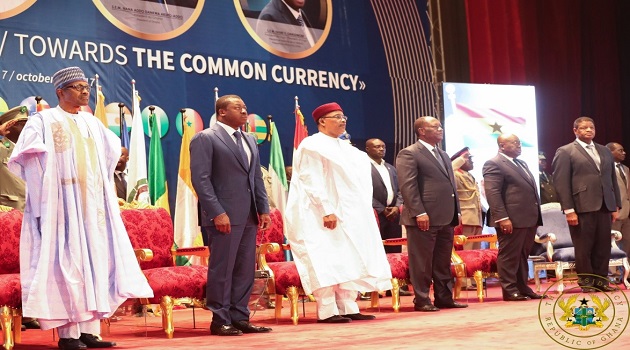 Heads of State from the Economic Community of West Africa States ECOWAS are meeting in Accra on Wednesday in a bid to fast track processes towards meeting the 2020 target for the introduction of a single currency ECO.

Wednesday’s meeting was preceded by a meeting by Finance Ministers and Central Bank Governors in the Sub region.

Attempt to meet the target again could not materialize due to the recent outbreak of Ebola in the three of the West African Countries namely SierraLeone Guinea and Liberia.

The development took a huge toll on the economies of these three countries thereby affecting the timelines for meeting the target.

Welcoming West African Heads of State to Accra for the 5th Presidential Task-force meeting, Ghana’s Vice President was optimistic that the outcome of Wednesday’s meeting will help in achieving the new 2020 target.

The last meeting of the presidential task force on the single currency was held in Niamey, Niger in October 2017.