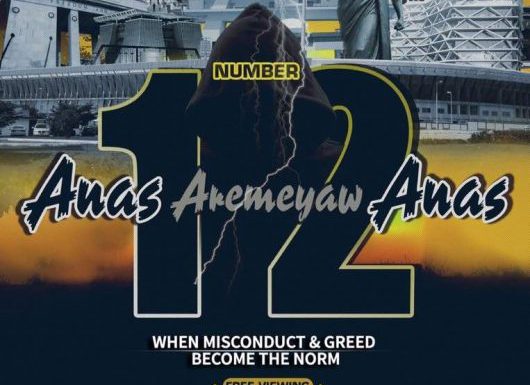 Ghanaians are eager to watch one particular documentary this week, which will detail corruption in football administration in the country.

Screening of the documentary produced by investigative journalist, Anas Aremeyaw Anas will take place on Wednesday and Thursday.

Screening of Number 12, the name for the production will take place in, Accra with interest high among Ghanaians.

There is a reason for the high interest in Anas’ latest production. It is due to the involvement of prominent personalities in alleged corrupt acts.

The president of the Ghana Football Association, Kwesi Nyantakyi is captured in some aspects of the documentary taking money from potential investors.

Nyantakyi reportedly used the name of Ghana’s President, Nana Akufo Addo in some instances to take money from the investors.

He and some government officials are now under investigations for various crimes including taking bribes to award contracts.

There have always been concerns about corruption in Ghana’s football association without a concrete evidence and therefore the latest investigation has attracted huge interest.

The work of Anas is critical in revealing those who are corrupt and helping to implement some reforms, according to analysts.

The hierarchy of the football association especially risks embarrassment with some calling for reforms already across the board.

Match officials such as referees, coaches and club owners are also captured in the video engaging in corrupt acts.

Anas Aremeyaw Anas uses painstaking and life risking methods in unearthing corruption in the public sector in Ghana and Africa.

He usually disguises himself making it difficult for corrupt persons to identify him, a method that some of his critics consider inappropriate.

There are reactions to the screening by Anas on social media as many look forward to it.

When Anas went undercover pretending to be a fraudster in order to bust corrupt guys.

Yaanom have gone for that tape where he was pretending to be a bad guy as proof that he is corrupt.

I can’t deal with this level of ignorance and stupidity. #Number12 #AnasIsComing #IamAnas

I asked a friend if he’ll be going to see #Number12 and he said he’s scared @anasglobal ‘s enemies will blast the place ???????

Ever since @anasglobal said he will release his exposè on June 6th, the days has been slow… Last year by this time we were in August heading to September… #IamAnas #Number12