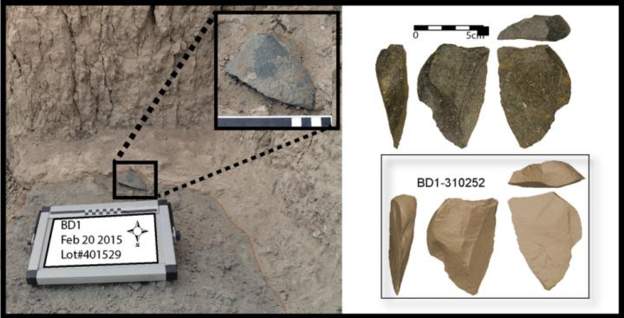 Man strangles girlfriend to death after arguing over coronavirus

The stone tools are believed to have been produced more than 2.58 million years ago.

A team of scientists has discovered one of the oldest stone tools in Ethiopia.

The stone tools are believed to have been produced more than 2.58 million years ago.

But the oldest stone tools ever discovered were found in Kenya and are 3.3 million years old.

Nature World News reported that “Analysis by the researchers of early stone age sites, suggests that stone tools may have been invented many times in many ways before becoming an essential part of the human lineage.”

Ethiopia to free over 4,000 prisoners over coronavirus

The findings were published this week in the Proceedings of the National Academy of Sciences.

The excavation site where the stone tools were discovered is known as Bokol Dora 1 or BD 1.

The site is located close to the 2013 discovery of the oldest fossil at Ledi-Geraru in the Afar region of northeastern Ethiopia.

That fossil which was a jaw bone, dates to about 2.78 million years ago, some 200,000 years before the then oldest flaked stone tools.

It has taken the team of scientists five years to “find out if there is a connection between the fossils and the stone tool,” according to Nature World News.

According to the Ethiopian News Agency research associate on the project, David R Braun, said the tools are “pieces of chipped stones” that are 100,000 years older that another discovery in Ethiopia.

The search for this connection was triggered when Arizona State University geologist Christopher Campisano saw “sharp-edged stone tools sticking out of the sediments on a steep, eroded slope.”

Campisano was quoted as saying that “At first we found several artifacts lying on the surface, but we didn’t know what sediments they were coming from”.

“But when I peered over the edge of a small cliff, I saw rocks sticking out from the mudstone face. I scaled up from the bottom using my rock hammer and found two nice stone tools starting to weather out.”