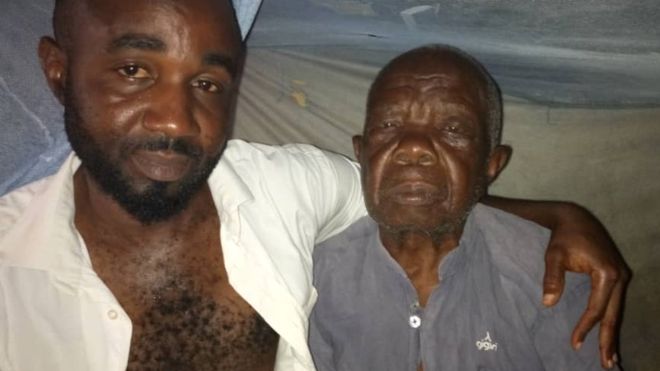 Paul and Celestine Egbunuche spent 18 years in jail together and were on death row for four years. Photo: GLOBAL SOCIETY FOR ANTI-CORRUPTION

Celestine Egbunuche is 100 years of age and for the past 18 years has been in prison on death row.

Egbunuche and his son Paul, 41, were both charged with hiring people to kidnap and kill a man over an alleged land dispute in Imo state.

They have both pleaded their innocence since they were detained in June 2000 and their subsequent conviction and sentencing to death in 2014.

Egbunuche’s story however gained prominence last year with representatives of Global Society for Anti Corruption, an NGO campaigning for his release.

The Nigerian government has now granted Celestine a state pardon resulting in his release from prison.

She told the BBC “I’m so grateful to God for this day. I’m the happiest human being on Earth.”

Representatives of Global Society for Anti Corruption, the NGO that campaigned for his release were also there to welcome him.

Egbunuche is free but has some health problems including diabetes and failing eyesight. His daughter says it will be challenging paying his bills.

The family does not have the means to cater for him. Paul his son who is currently in prison did not receive a pardon.

The death sentence is not often carried out in Nigeria and other parts of Africa. Rights groups like Amnesty International have campaigned for the death penalty to be abolished.

Nigeria executed seven people who were on death row between 2007 and 2017.

Liberians stage mass protest as they push for reforms