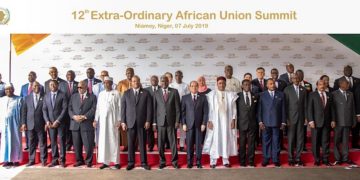 Is the world really happy with Africa’s free trade area?

Is the world really happy with Africa’s free trade area?

So on July 7, 2019 African leaders made history by launching the much talked about continental free-trade zone in Niger’s capital, Niamey.

It would be the world’s largest free trade area uniting 1.3 billion people and creating a $3.4 trillion economic bloc.

The free trade zone is considered a critical action to usher Africa into a new era of development.

The African Continental Free Trade Area (AfCFTA) will have 54 African Union (AU) members. Eritrea is yet to join but that would not matter though.

But who is the happiest? the world or Africa? At least Africans who believe in the Pan-African dream of uniting the continent would be including the freedom fighters who are all dead and gone.

Since the creation of the Organization of African Unity (OAU) which has now been re-branded African Union, the dream has been to unite on all fronts.

One of the founding fathers of the organization, Ghana’s Kwame Nkrumah gave a powerful speech at the inaugural ceremony of the OAU Conference in Addis Ababa, Ethiopia in 1963.

He said “As a continent we have emerged into independence in a different age, with imperialism grown stronger, more ruthless and experienced, and more dangerous in its international associations. Our economic advancement demands the end of colonialist and neo-colonialist domination in Africa.

But just as we understood that the shaping of our national destinies required of each of us our political independence and bent all our strength to this attainment, so we must recognise that our economic independence resides in our African union and requires the same concentration upon the political achievement.”

Nkrumah was emphasizing the fact that uniting as a continent is the only way out of economic colonialism and gaining economic freedom.

In another speech at an OAU summit Nkrumah spoke of the importance of a common market place for Africa.

The AfCFTA is a major project of the AU’s long-term development plan Agenda 2063, which emphasis the need to ease trade and travel across the continent.

In 1963 Nkrumah again in his speech said “The resources are there. It is for us to marshal them in the active service of our people. Unless we do this by our concerted efforts, within the framework of our combined planning, we shall not progress at the tempo demanded by today’s events and the mood of our people.

The symptoms of our troubles will grow, and the troubles themselves become chronic. It will then be too late even for Pan-African Unity to secure for us stability and tranquillity in our labours for a continent of social justice and material well-being. Unless we establish African Unity now, we who are sitting here today shall tomorrow be the victims and martyrs of neo-colonialism.”

It has taken decades for African leaders to be moving towards really getting united for economic freedom.

But is the world really happy for Africa? Years after many African countries gained independence, they have become extremely dependent on Europe and the United States economically.

In recent years China has also deepened its presence dolling out money to African countries. The rest of the world has burdened Africa with huge debts.

Africa is virtually at the mercy of the rest of the world. The West has become the blood stream of African economies.

Many African countries will grind to a halt if their budgets are not supported by external donors.

But the continent is the richest globally with many natural resources. Most of these resources are not processed in Africa so it means the value is insignificant for African economies.

Manufacturing has for many years been non-existent with only assembling of essential products.

Moving across the continent has been hell for many.

The African Continental Free Trade Area (AfCFTA) is expected to remove barriers to trade, like tariffs and import quotas, allowing the free flow of goods and services between its members.

Members countries have committed to eliminate tariffs on most goods. That will increase trade in the region by 15-25% in the medium term.

In June this year the United States government gave the strongest indication that African countries piling up their external debts won’t be able to access any debt relief.

Many African countries continue to rely on loans and excessive borrowing largely from the West and China.

It’s leading development economists said “Almost 40% of sub-Saharan African countries are in danger of slipping into a major debt crisis”.

The World Bank in 2018 also revealed that 18 countries are at high risk of debt distress.

These countries have their debt-to-GDP ratios surpassing 50%. The total amount of external debt for Africa is estimated at $417 billion.

China has become the major borrower for African countries.

The Jubilee Debt Campaign, a charity that campaigns for the cancellation of poor countries’ debt has said that around 20% of African governments’ external debt is owed to China.

As the largest single lender nation to Africa, China has a combined state and commercial loans estimated to have been $132 billion between 2006 and 2017.

Is it strategic to burden Africa with debt?

But multilateral institutions such as the World Bank account for a further 35% of African debt with 32% owed to private lenders.

Debt campaigners however say much of Africa’s current debts are commercial in nature and owed to western financial institutions or Eurobonds.

The Secretary General of the United Nations Conference on Trade and Development said of AfCFTA that it is “Africa’s renewed opportunity to steer its economic relations away from a reliance on external donors, foreign creditors and excessive commodity dependence, ushering in instead a new economic and political era focused on self-reliant cooperation, deeper integration and higher levels of intra- African trade.”

Egyptian President and African Union Chairman Abdel Fattah al-Sisi said at the AU summit opening ceremony that “the eyes of the world are turned to Africa.”

He adds that AfCFTA “will reinforce our negotiating position on the international stage. It will represent an important step.”

Should Africa get this trade deal going and effective, it could lead to securing economic independence.

That means not relying on so called external donors who business wise benefit if Africa continues to rely on them.

So Africa is happy that a dream from the past is on its way to becoming a reality but certainly not the rest of the world.

All eyes indeed will be on Africa to deliver or fail. It could spell doom for the continent or lift it out of the current economic hell it finds itself.

But there would be no one to blame excerpt the African if the common market fails to materialize.