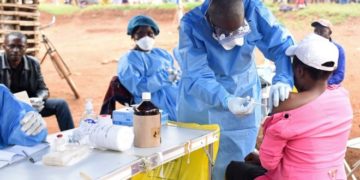 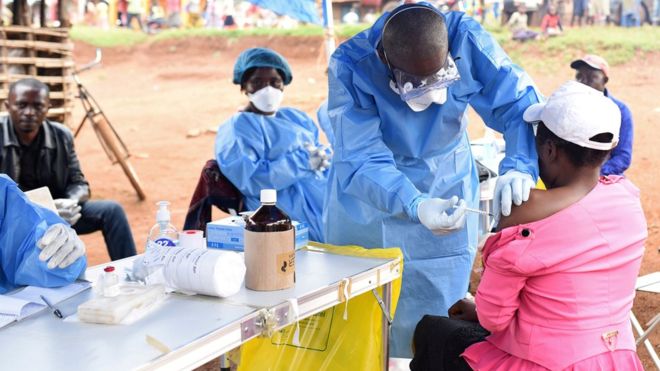 Health workers have been vaccinating people against Ebola to prevent the spread of the virus in DR Congo. Photo: Reuters

The World Health Organization (W.H.O) on Wednesday declared the current Ebola outbreak in the Democratic Republic of Congo a public health emergency of international concern.

This is the second worst Ebola outbreak of all time, in DR Congo.

The decision to declare the outbreak a public health emergency of international concern has come months after the WHO refused to do so despite appeals from health experts.

The head of the World Health Organization, Tedros Adhanom Ghebreyesus has called for countries to ‘take notice and redouble our efforts”.

Covid-19: Letter from Liberia’s ex-president who led the Ebola fight

Coronavirus can survive in air, WHO takes ‘airborne precautions’

He said it was time to “work together in solidarity with the DRC to end this outbreak and build a better health system”, for its people.

“Extraordinary work has been done for almost a year under the most difficult circumstances”, Mr. Tedros further said.

The decision was taken following the fourth meeting of the International Health Regulations Emergency Committee assessing the outbreak, at the UN in Geneva.

Tedros said “We all owe it to these responders – coming from not just WHO but also Government, partners and communities – to shoulder more of the burden”.

This definition refers to a situation that is:

The W.H.O in a statement “cited recent developments in the outbreak in making its recommendation, including the first confirmed case in Goma, a city of almost two million people on the border with Rwanda, and the gateway to the rest of DRC and the world.”

So far, there have been more than 2,500 cases of infection.

Nearly 1,670 have died in the provinces of Ituri and North Kivu, where multiple armed groups and lack of local trust have hampered efforts to get the outbreak under control.