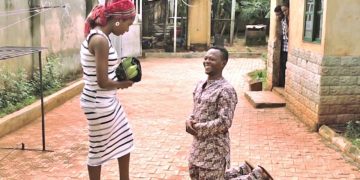 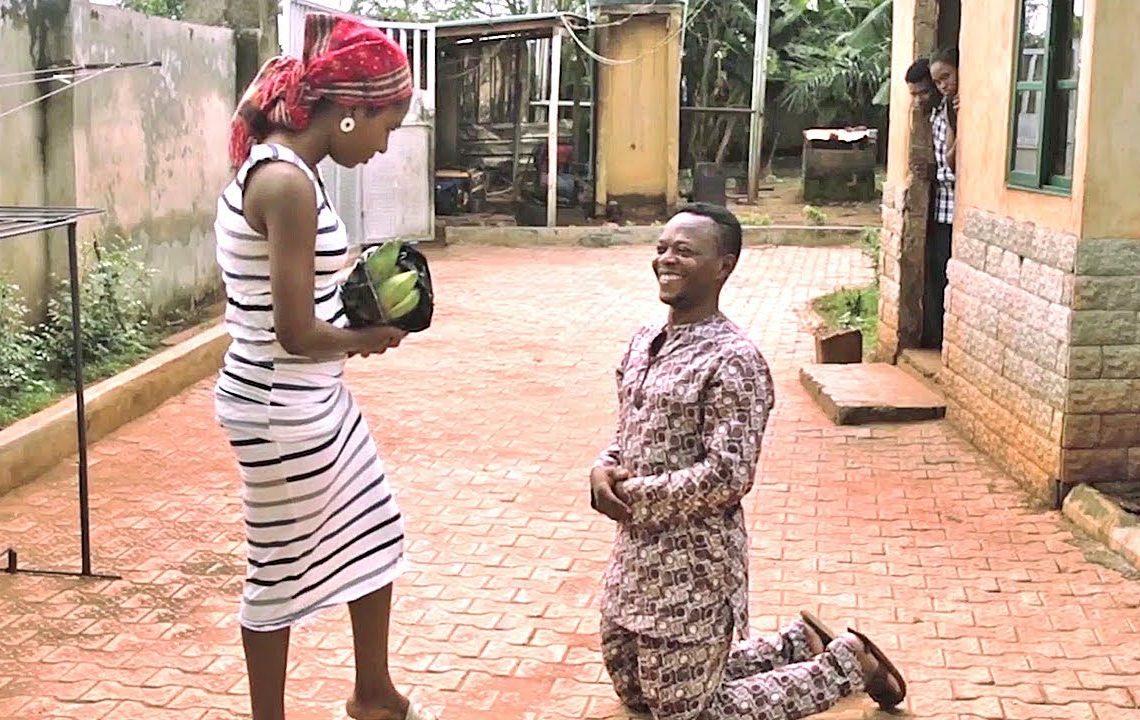 A scene from an African movie where a man proposed to his girlfriend. Photo: YouTube

Ghana’s Food and Drugs Authority this month clamped down on the activities of a local herbal shop called “Mama Gee herbal shop”.

The shop contains products for women including alleged charms to attract husbands.

“It upgrades your vagina, and leads you to a higher pecking order amongst your female partners” she said.

The shop located in Madina, near Accra has been very famous among residents though.

It was the designated safe haven for many women who for one reason or the other had fallen out with their partners and needed that spark to reignite what once was a flourishing relationship.

For others too, products like the favour oil were bound to do the trick on any man who struck a conversation with you.

The seller told female patrons that “you virtually had your man in the palm of your hands without even granting him access to the Holy Grail which lies between the thighs.”

The patronage of the products was massive, with lots of Ghanaian slay queen’s reportedly visiting her just so their heart desires could be met.

Others in parts of Ghana also had the opportunity to request via phones for deliveries to be made at a cost.

For the average Ghanaian, knowledge of charms and its use on people for a desired effect is something that is almost expectant throughout one’s life.

In all of this, access to persons who facilitate these ‘charms’ has proved difficult. Primarily because it is not a generally accepted way of doing things thus, people shy away from openly seeking out persons who possess the goods.

The Food and Drugs Authority in closing down the shop said the products were not captured in its registry.

Mama Gee has been picked up by the police/FDA for selling herbs that tightens pussies!!! Wow pic.twitter.com/JsfANscsJN

Head of Communications at the Authority James Lartey said “Mama Gee advertised herbal concoctions and other products that per the law required that are approved by the authority”.

It is for this reason he adds that the police is investigating her for “selling unauthorized products and advertising without permission but there is a potential other charges could be proffered during investigations”.

Mama Gee has been granted bail and has defended her business asking her customers to visit for more products.

‘Friend and enemies’ of Mama Gee

The action of the authority however has been met with divergent opinions. While some laud the authority for taking action on what seems to be the growing perverted sale of sex enhancement drugs, others argue that the FDA is busying itself with matters of belief.

They argue that ‘charms’ fall within the category of religion and what one chooses to practice thus a decision to stop people from accessing a practice amounts to a constitutional breach of their rights.

In the face of this debate, matters of morality also emerged. Sections of the public believe there is too much noise about sex with the attendant TV and radio commercials.

A reason some argue resulted in the ban of alcoholic commercials on TVs till after 9pm particularly because these beverages speak more to providing male partners with strength to last longer in bed.

The regulatory authority however maintains, the products particularly the purported Aphrodisiacs must be regulated.

But what happens to the many social media handles that have taken up the business of selling ‘charms’ and unregistered aphrodisiacs?

Well the authority says, it has started a stakeholder engagements with online sales platforms.

“We are having a meeting with online shops, Jumia, Tonaton and the likes. Because as things evolve we need to adapt to the changing trends,” Lartey said.

He however admits to the difficulty of dealing with persons hiding behind social media to sell the products.

“These are things we are monitoring. But you need to understand it’s not everything we can see, if you look at the multifaceted nature of social media it is difficult to deal with them.

For now, Elizabeth Torgbor, known for her works as Mama Gee is currently on police bail with investigations ongoing.

Mama Gee finally voice out after her arrest pic.twitter.com/Ih0KVhFXey

The regulatory authority, FDA says it will clamp down on all persons engaged in the sale of unregistered products.

What is left is a realization that persons like Mama Gee have come to stay, with a will to evade regulatory control.