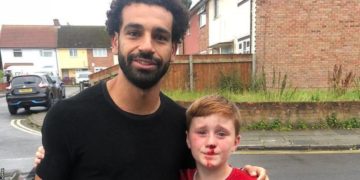 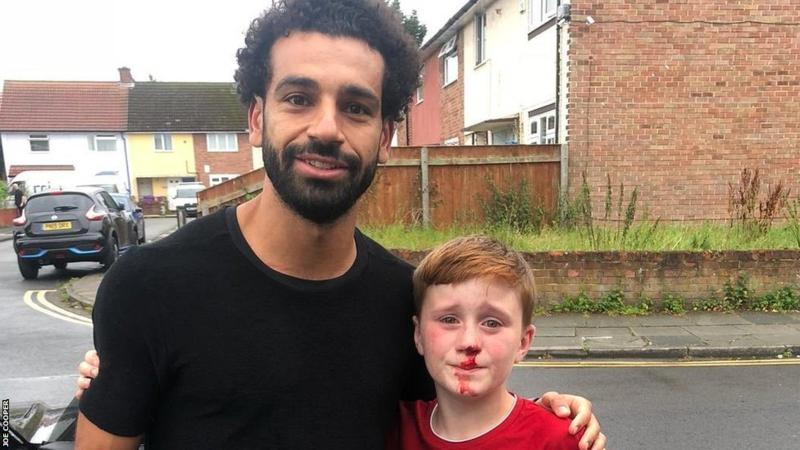 Footballers often inspire unswerving devotion, but one boy has felt the full force when he hit a lamp-post while running after Mohamed Salah.

Louis Fowler, 11, was trying to get the Liverpool striker’s attention, who was driving out of the club’s training base on Saturday, when he ran into the post.

The Reds fan fell and “busted his nose”, his stepfather Joe Cooper said.

He added that they were “gobsmacked” when Salah soon turned up at their home nearby to check on Louis’ condition.

Mr Cooper told the Liverpool Echo that Louis and his brother, who live near the Melwood training base, had been spending their summer holidays trying to get pictures of their footballing heroes.

“Unfortunately, Louis went straight into a lamp-post while running after [Salah’s] car and busted his nose when he hit the floor,” he said.

Neighbours took Louis and his brother home, only to be followed shortly afterwards by Salah, who had turned back.

“It all happened so quick we hadn’t even had the chance to clean him up,” Mr Cooper said.

“He’d seen one of the boys had hurt himself and he had the decency to drive back into the close to check that he was OK. No-one could believe it. Everyone was gobsmacked.

“Mo asked if the boys were all right and gave them a big hug, which was what they both needed. They were made up and Louis forgot all about being injured.”

Louis was later treated at Alder Hey Children’s Hospital, where he was the “talk of the hospital” because of his encounter.

Mr Cooper said: “The face is a bit sore but he is great! He can’t stop smiling!”

Speaking on the BBC’s Victoria Derbyshire programme, Louis said that he ran into the lamp-post due to the excitement of seeing his idol.

“I ran with my brother… in my excitement I wasn’t focusing on what was in front of me,” he said.

Louis’ brother Isaac, 10, said he ran and “proper jumped on” Salah when the star later arrived on their street. “I was getting carried, and I was like ‘Mo!’… I was shouting his name,” Louis added.

And the young fan had one final wish for Salah. “I love him so much, he’s the best and hopefully he scores a hat-trick against Chelsea,” Louis said.

Since joining Liverpool from Roma in 2017, Salah has been praised for his high-scoring performance on the pitch as well as his charitable work off it, including tackling Islamophobia.

The Egyptian striker was the only male footballer to feature in Time magazine’s list of the world’s 100 most influential people of 2019.