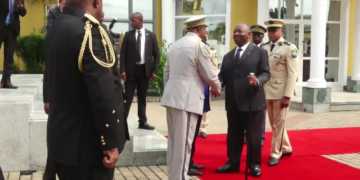 President of Gabon Ali Bongo has made his first live appearance in public nearly 10 months after suffering a stroke.

He was seen walking with a stick while attending ceremonies in the capital Libreville.

President Bongo suffered stroke last year during a trip to Saudi Arabia. That plunged the country into governance crisis.

It resulted in a failed coup forcing him to return home quickly to re-assure citizens.

One drink of alcohol a day increases stroke risk

President Ali Bongo returned home in January this year to swear in his new government.

He reshuffled his government after some soldiers stormed the national radio building to announce the seizure of power.

After spending a few days in hospital in Saudi Arabia, Bono received most of his medical treatment in Morocco.