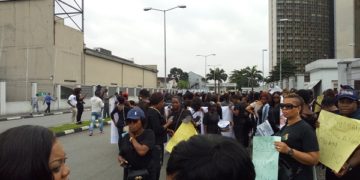 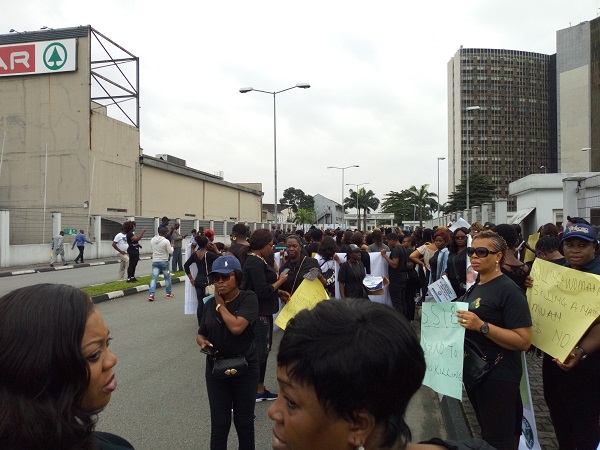 Hundreds of women in Nigeria on Wednesday marched to the Government House in Port Harcourt, protesting the killing of young women in hotels in Rivers State.

The women clad in black attire held placards with messages that called for an end to the killings.

At least, eight young women have been murdered in different hotels in the River state within the last two months.

Some of those killed are believed to be prostitutes, whose acts are considered illegal and often get no protection from police.

The protesters say everybody, including prostitutes, deserve the right to life and should not be killed in such a gruesome manner.

Reporting live from the protest in port harcourt government house…

The protesters are hoping their agitations will result in changes and better protection for women.

They also say it is important that the state authorities and the police make the state safer for all residents.

We are here to protest against the killings of the girls in Port Harcourt. #ProtectPhGirls pic.twitter.com/8Mz2U6HDRZ

Since last week there have been activism across the state with some social media users resorting to the hashtag #ProtectPhGirls to express their concerns over recent wave of killings.

Right in front of the Government House
Everyone is here for the peaceful protest to end the killing of our Women in Portharcourt #ProtectPhGirls pic.twitter.com/QGx9dwLDsn

There have been so many reported cases of abduction, rape and killing of women in South Africa and Nigeria (Portharcourt) recently💔. Let’s stop the violence and crimes against Women. Stop gender-based violence! Enough is Enough. #ProtectPhGirls #VoiceOfTheDon pic.twitter.com/lBIvR4VU4T

Protect portharcourt girls!!
We say no to serial killings!#ProtectPhGirls pic.twitter.com/I60v91ivWV

Another girl narrates how she escapes the serial killer. Read and Rt. #ProtectPhGirls #ProtectPHWomen pic.twitter.com/yWVilK3pMZ

The African choir hoping to win America's Got Talent