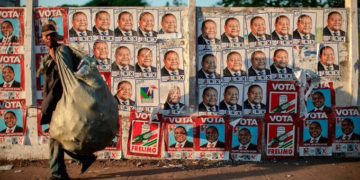 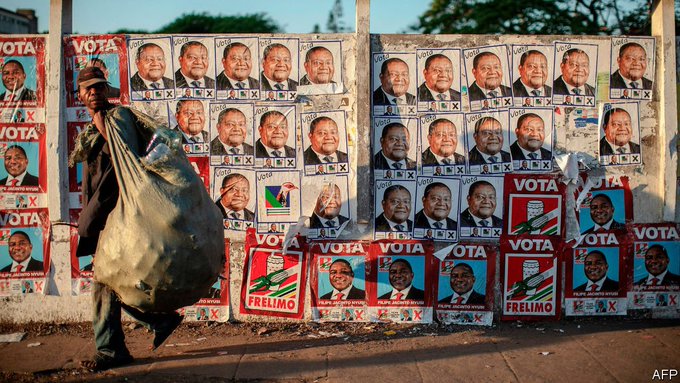 Campaigning has ended in Mozambique ahead of crucial presidential, legislative and provincial elections on Tuesday.

Four candidates are contesting the presidency but 26 parties and other coalitions are seeking control in legislative and provincial elections.

These parties are Renamo, MDM, New Democracy, Amusi, Podemos, and the Ecologists.

Filipe Nyusi who is 60 years is the incumbent President seeking a second term to prolong his Frelimo party rule in Mozambique since independence in 1975.

He won his first presidential term in the 2014 elections.

55 year old Daviz Simango who is representing the Democratic Movement of Mozambique (MDM) is running for the third time.

He failed in his bid for the presidency in 2009 and 2014 fishing in third in both elections. Daviz Simango, since 2003 has been serving as mayor of Beira, Mozambique’s second largest city.

Ossufo Momade, 58, assumed the leadership of Renamo in 2018, and is running for the first time.

Then 57-year old Mario Albino,  who is also running for the first time will run on an Amusi ticket, a party created in 2015.

There have been several cases of killings and deaths leading to Tuesday’s elections.

The government has said some polling stations in parts of the country could be relocated due to an ongoing military operation against Islamist militants.

Militants have been carrying out deadly attacks in the north of the country, specifically northern Cabo Delgado province.

The attacks have forced people to flee their homes. Election officials say they are considering relocating the polling stations as well.

Mozambique was also shocked by the killing of a prominent election observer by policemen last week.

DR Congo: New Ebola vaccine to be used in November