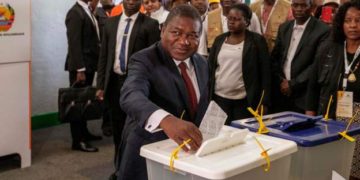 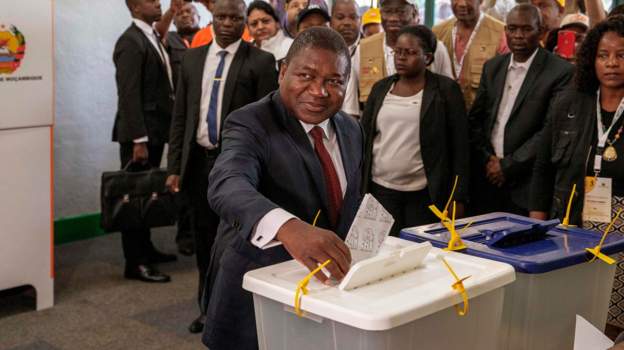 Voting began on Tuesday in Mozambique where voters are electing a new president and other local officials.

Four candidates are contesting the presidency but 26 parties and other coalitions are seeking control in legislative and provincial elections.

Incumbent President, Filipe Nyusi is seeking re-election and is expected to win to prolong his Frelimo party rule in Mozambique since independence in 1975.

He won his first presidential term in the 2014 elections.

President Filipe Nyusi who has already cast his ballot has asked citizens, to refrain from violence.

President Nyusi has voted at 7 am as scheduled. Says Electoral Commission yesterday asked him to address the nation. He appeals voters to refrain from violence, asks observers to be patient with delays on accreditation. Says country has never received so many observers before. pic.twitter.com/KZQHayyxzc

55 year old Daviz Simango is representing the Democratic Movement of Mozambique (MDM). He is running for the third time.

He failed in his bid for the presidency in 2009 and 2014 fishing in third in both elections.

Daviz Simango, since 2003 has been serving as mayor of Beira, Mozambique’s second largest city.

Ossufo Momade, 58, assumed the leadership of Renamo in 2018, and is running for the first time.

Meanwhile security has been beefed up in Mozambique’s gas-rich northern province of Cabo Delgado.

There have been several militant attacks in the troubled province resulting in deaths and some fleeing their homes.

The government declared Tuesday as a holiday to enable voters participate in the electoral process.

But some private firms have threatened to take action against employees who will fail to turn up to work.

The government has called on employers to take observe the holiday directive or face punitive measures.

"Made in Rwanda" Volkswagen cars go on sale