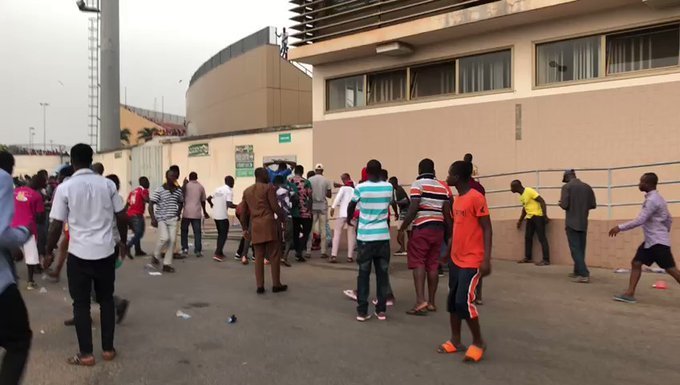 A football fan has been shot by police after a football match at the Baba Yara Stadium in Ghana’s second biggest city, Kumasi.

The supporter according to local media was hit by a warning shot fired by the police at the stadium on Sunday.

Joy FM in Accra reported that the man who was hit by a stray bullet was in critical condition, fighting for his life.

According to reports, fans of Asante Kotoko were unhappy with their team’s 1-0 defeat to Chelsea, sparking a confrontation between them and security officials.

A good work done by the security officers at Baba Yara Sport Stadium.

The fans during the match earlier expressed their displeasure at decision made by the referees by throwing bottles and sachets of water onto the field.

The Ghana Football Association has condemned the incident saying in a statement that “We are saddened by reports of injuries to football fans and the hospitalization of a fan, following an alleged gun shooting incident.”

“While we conduct our own inquest from our designated matchday officials to find out the exact cause of the unfortunate incidents, we call on the Police Service to also conduct thorough investigation, especially on the alleged shooting incident,” the statement added.