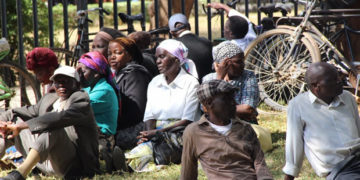 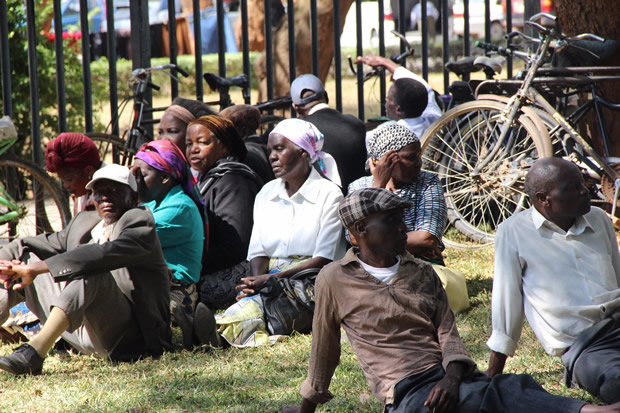 A cross-section of Zambian residents are concerned at the non-payment of retirement benefits to a group of government retirees, 20 years from when the payments became due.

The retirees have been camping at Zambia’s Ministry of Justice in the capital, Lusaka, for the past five months demanding to be paid.

As there are no shelters at the spot they usually stand, the scorching Zambian summer sun that they endured the past few months, has now been replaced by heavy rains.

The rainy season in Zambia, starts in November and ends around April.

December, January, February and March, are the wettest months, with heavy downpours. So far, January, 2020, has had continuous rains, especially in the Afternoon, which means these retirees now have to  get soaked every other day and sometimes daily.

Some of their former colleagues have died without being paid, others have just given up, while the pleas by those that are still chasing their payments seem to be falling on deaf ears.

Chief Government Spokesperson, Dora Siliya, claims that the lawyers of some of the retirees were given the monies, suggesting that they have been swindled.

But politician, Anthony Bwalya, who is a member of the country’s main opposition party, the United Party for National Development, challenged the government during a live radio programme, to publish a full list of who among these retirees have been paid, how much and when, as well as which lawyers were paid the monies, so that they could give it to the rightful individuals.

“We cannot continue throwing our parents [retirees], from one end of the pillar, to another end of the post, over small amounts of money which the government can raise and pay them in one bit,” Bwalya laments.

“Because now, the government through their spokesperson, has gone on the record,  that some of those people have been paid, it is important that the government is held accountable for the information that they release to the public, otherwise, that will amount to a government trying to take for granted, the intelligence and judgement of its people,” he added.

For National Democratic Congress, party president, Chishimba Kambwili, government’s lack of sympathy for the suffering of the retirees, is something he cannot wrap his head around.

“People getting soaked every day! It has been five months now, they’ve camped there and you can’t sympathise with them. You are able to find money to finance by-elections, how are you failing to find money to pay those poor retirees? People that gave their service to this republic. Please pay the retirees and retrenchees,” Kambwili pleads, adding that they’ve suffered enough.

Lack of money for beneficiaries

Every year, government allocates a specific amount of money, to terminal benefits payments, but most of the time, the allocation or money released is less than the number of beneficiaries.

Non-payment of benefits has in the past produced destitute out of many retirees and resulted into some early deaths, due to stress, among other negative impact.

Last year, over 12,000 Council retirees appealed to President Edgar Lungu to constitute a commission of inquiry to establish why their retirement benefits were not being paid.

The retired Council workers charged that their payments had been overlooked for too long resulting in serious suffering.