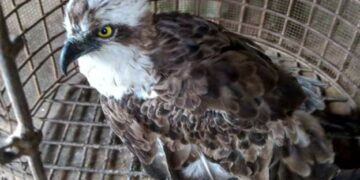 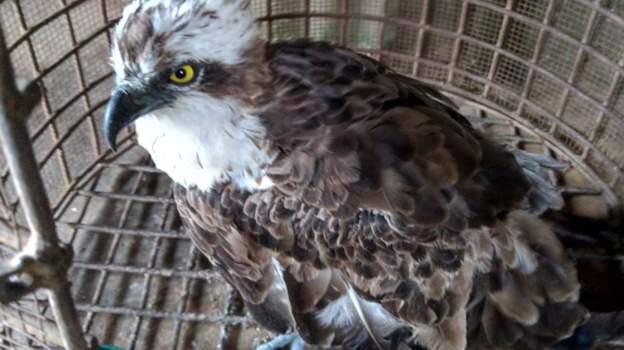 Rare migratory birds have been found in Ghana and Kenya, wearing metallic rings on their legs.

The referring rings had website address that shows that they were coming from Europe.

In Ghana locals discovered one of such birds in the Western part of the country with a metallic bangle on its leg.

The inscriptions on the bangle showed the bird came from a London Museum.

The strange bird appeared hurt probably because of the long journey to Africa or the long stay of the bangles on the legs.

A lawmaker of Ellembelle, the community where the bird was found, Emmanuel Armah Kofi-Buah has decided to publicize the news to get in touch with the owners of the bird.

He said the bird may have may have followed the harmattan blues into Ghana.  Wildlife officials in Ghana have already been contacted about the bird.

In Kenya the country’s Wildlife Service (KWS) also said a migratory Osprey was caught in a fishing net in the western region of the country, traveling from Finland.

The bird was found with some bruises on the leg but appeared healthy although it had lost some weight and was dehydrated, KWS said.

The statement from the KWS said “The bird’s origin has been established from a refereeing ring on its led whose details show that it was ringed in Finland (Museum Zool, Helsinki Finland, www.ring.ac, M-68528).”

Migration of birds to Africa

As far back as 2011 a research by the Birdlife International revealed that about a quarter of British birds, which fly annually across the Atlantic, end up in Ghana and not returning to Britain.

Every year, about a million birds of various species travel from Europe mainly, from Britain to the south of Sahara.

Many species that breed in the UK make a journey through Europe, across the Mediterranean and the North of Africa, before tackling the mighty Sahara and finally arriving in Ghana.

According to the research, some of the bird continues on into other parts of Africa, but many choose to stay the entire Northern winter in Ghana.

Organisations such as Ghana Wildlife Society, the Centre of African Wetlands have been conducting research   into migrant birds in Ghana towards addressing the threats faced by the migrants.

Such studies have been carried out across the Forest reserves and wetlands in the country with places such as the Ramsar sites (Sakumono, Keta, Songor and Densu Delta) identified as important feeding grounds for migrant shore birds.