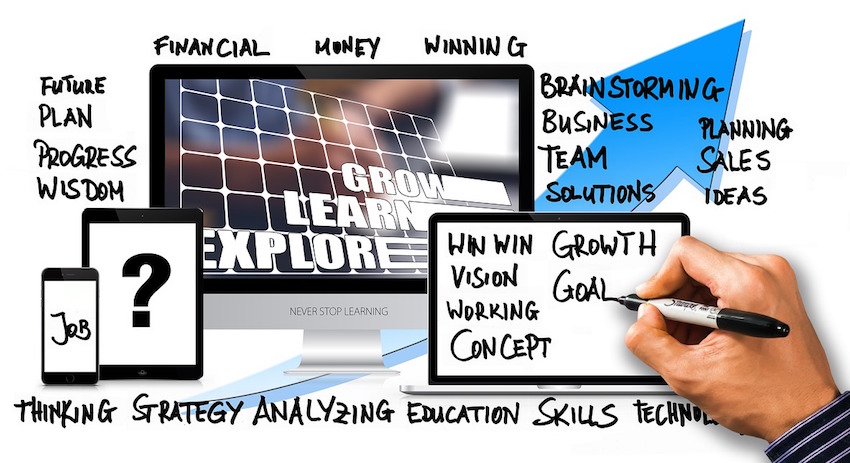 But this definition by Myrko Thum of Entrepreneurial Mindset is the one I like best:

Your mindset is the sum of your knowledge, including beliefs and thoughts about the world and yourself in it. It is your filter for information you get in and put out. So it determines how you receive and react to information.

1) Successful Entrepreneurs have a focused mindset!

The key to moving from wantreprenuer to successful entrepreneur is having a viable business.

That means getting things done!

This means being focused!

Without focus and implementation – that ‘eureka’ moment counts for nothing!

People who get big things done – do less of the small things! Successful entrepreneurs scan and eliminate distractions quickly.

“Every activity has an opportunity cost. Ask, ‘Is this activity worth what I am sacrificing for it?’ Clarity of purpose must come first. Be absolutely ruthless in refusing to spend time where it simply cannot give you optimal results.” –Steve Pavlina

3) Successful Entrepreneurs are hard-wired to see opportunity where others do not.

I consider this the No1 Entrepreneurial Mindset that all great entrepreneurs share.

Successful entrepreneurs are observant – they are sharp-eyed, they notice things regular folks do not.

How Richard Branson was inspired to create an airline is a great example of an entrepreneur spotting an opportunity.

Richard Branson was traveling to Puerto Rico when his flight was canceled, leaving him and hundreds of other passengers stranded. Branson didn’t moan about his situation – he chartered a plane and divided the cost of the plane by the number of seats, and charged the stranded passengers $39 to re-book their seats.

Go for the opportunity – figure out the details later

Another example is Manny Khoshbin – multi-millionaire real-estate investor – who came to the USA from Iran aged 14.

He believes in going for the opportunity and figuring out the details later.

Manny tells how on an early deal he struggled to scrape together a $10,000 deposit to put down on a multi-million-dollar bank-owned abandoned shopping center. The deal was too good to pass up, so he risked the $10,000 – believing he could raise the rest of the financing later. [which he did]

This deal ended up making Manny over 1 million dollars profit…

A Million Dollar profit he would not have made if he had not trusted that he could figure out the details later!

Focus on opportunities, not obstacles.

Entrepreneurs have an increased appetite for risk compared to the general population and nowhere is that more evident than in decision making.

A wrong decision can be corrected – but you can’t go back in time and reverse not making a decision!

Remember – In business, a correct decision is wrong when it is taken too late.

Even if they have never heard of it, the most successful entrepreneurs, follow the 40-70 Rule.

One such time is when you are angry.

Making a decision when you are angry rarely works out.

Or as a mentor of mine succinctly put it:

“I never get the accountants in before I start up a business. It’s done on gut feeling, especially if I can see that they are taking the mickey out of the consumer.”

Intuition is that magic that can get a successful entrepreneur from 40% confidence to 70% confidence in a decision.

Successful entrepreneurs are comfortable with not knowing it all. [ figuring out the details later ]

Wait for certainty and you will only see what everyone else can see and miss on the opportunity to get ahead of the game.

Never apologise for trusting your intuition – your brain can play tricks, your heart can blind, but your gut is always right. -Rachel Wolchin

When in doubt ask yourself…

Does this feel right?

If you have read any of my previous posts you will know that Stuart Wilde was an early influence on my entrepreneurial mindset.

It was Stuart Wilde who introduced me to the discipline of Minimal Movement.

Minimal Movement is a time management strategy where you eliminate all actions that serve no purpose, and you allocate the least possible energy and effort to the tick-tock things you have to do.

Minimal movement is analyzing what is very important to you, slightly important and not important at all, thus focusing on what serves you best.

Minimal Movement is a powerful tool for compounding focus and getting results.

I recently listened to Brent Charleton and Ian Stanley (of LionHeartWorkshop) discuss Time Management and how they structured Things To Do Lists.

They made a distinction that reminded me a lot of the Minimal Movement strategy.

When constructing Things To Do lists they recommend we break down tasks into 3 different priorities:

c) Tasks That Produce Maintenance Money. (This is things you do to keep the money flowing from obligations or commitments you have already made such as a Monthly Newsletter or managing a membership site.)

If you focus your day doing tasks that produce maintenance money then you will plateau very quickly – or even go backwards.

Successful entrepreneurs are always adding new strings to their bow…

They are thinking ahead and looking for new ways to grow their business and make money.

They are constantly on the lookout for tasks that will produce money later.

Successful Entrepreneurs start their day with a Revenue Generating task!

6) Successful Entrepreneurs have a Stoic Mindset

Stoicism and being Stoic in the face of adversity is not a new idea – but it is a philosophy and way of thinking that has seen a re-emergence in the last decade.

Stoicism helps us to direct our thoughts and actions in an unpredictable world.

The Stoic Entrepreneur is dedicated to:

By these standards most successful entrepreneurs are stoic – even if they do not know it!

Certainly that was the case with me…

In my 20’s – long before I heard the term Stoicism, one of my mentors explained that with every event in life I had a choice.

I could either react to it OR respond to it.

A reaction is usual quick, without much thought, tense and aggressive.

A response is usually calm and non-threatening.

Between stimulus and response there is a space. In that space is our power to choose our response. In our response lies our growth and our freedom.

7) Successful Entrepreneurs are comfortable saying NO!

If you want to get more of the important things done – you need to say NO more often.

Most of us, especially in friendships, hate to offend.

But the truth is that true friends understand and respect your position and priorities.

Focus only on tasks that get you closer to your goals.

As Craig Ballantyne suggests – create a NOT to do List

We have spoken previously about ‘You are the average of the five people you spend the most time with.’ – but this is not a new idea – the great Stoic teacher Epictetus explained it perfectly.

“Above all, keep a close watch on this—that you are never so tied to your former acquaintances and friends that you are pulled down to their level. If you don’t, you’ll be ruined. . . . You must choose whether to be loved by these friends and remain the same person, or to become a better person at the cost of those friends . . . if you try to have it both ways you will neither make progress nor keep what you once had.”

Still as relevant today as it was in 100AD!

Of course, this does not mean that you don’t make time for the three F’s (Fun, Family and Friendship)

They know that change is constant and part of life.

Either way successful entrepreneurs deal with them positively.

Successful entrepreneurs – in the light of new information, reserve the right to change their mind – reverse a decision, close a business.

They are not embarrassed to acknowledge when they got things wrong.

Above all – they don’t allow the potential opinion of their critics to influence them or stop them taking action.

Talent does matter, but hard work matters even more…

Life is a manifestation of where you direct your energy.

Successful entrepreneurs understand that hard work compounds and invest the time and effort necessary to succeed.

It is not unusual to discover that some of the most successful entrepreneurs did not excel in school or college.

What made them different was their work ethic and commitment to seeing a task completed.

There are some who will suggest you don’t need to work hard to be successful – but don’t be deceived.

Sure, you can make money in your sleep, but first you must put the work in!

“Working hard overcomes a who lot of other obstacles. You can have unbelievable intelligence, you can have connections, you can have opportunities fall out of the sky. But in the end, hard work is the true, enduring characteristic of successful people.”  Marsha Evans

Optimism is defined as “the belief that good things will happen to you and that negative events are temporary setbacks to be overcome.”

This doesn’t mean you are naive or unaware of the potential difficulties ahead – it just means you approach difficulties and set-backs in a positive manner.

With an optimistic mindset you are inspired to work harder – whilst pessimism hinders you and demotivates you.

Success doesn’t create optimism; It is your optimism that leads to success.

This was first published on incomediary.com