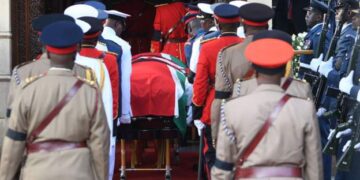 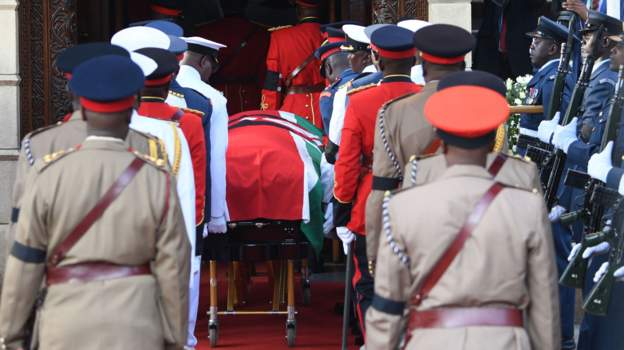 Kenyans on Tuesday gathered at the Nyayo National Stadium for the funeral of former President Daniel arap Moi.

Former Tanzania presidents Benjamin Mkapa and Jakaya Kikwete were also among other African leaders attending the funeral which was broadcast live on local television stations.

President Daniel arap Moi who died at the age of 95 was Kenya’s longest serving president.

Moi who ruled Kenya for 24 years died on Monday after being in hospital for weeks.

Moi replaced Kenya’s first President Jomo Kenyatta after his death in 1978 and rallied Kenyans to join in building the country.

But after a failed coup plot to overthrow him Moi gained notoriety for clamping down on freedoms and torturing opposition politicians without trial.

Kenyans given branded caps upon arrival at Nyayo Stadium
Stadium packed and gates have now been closed to members of the public #TheLastSalute pic.twitter.com/xZarv5sBfd