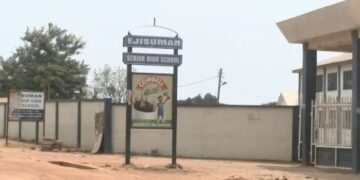 Ghana’s disciplinary systems in its senior high schools have come under intense scrutiny following a decision to deboardinize some seven female students.

The seven girls all of a school called Ejisuman senior high school in Ghana’s Ashanti region were expelled from boarding house following a viral video of the students making explicit comments on social media.

Authorities of the school in a statement said the girls who were final year students are to report from their homes to school to continue with their final exams.

The Parent Teacher Association said the girls showed no remorse, perhaps a reason why the punishment was upheld.

It said in a statement that the vulgar language used by the students tarnished the image of the school.

“They are not supposed to have phones in school. And also the vulgar language they used tarnished the image of the school.

I mean young ladies using such words that is the reason management and the disciplinary committee stripped them off their boarding statuses. Some of the parents were crying when they saw the video, there was even no remorse but for one student.”

But the justifications have been called into question. Education group, Africa Education watch said arguments of the schools image being tarnished was understating the value on the girls and the school’s role in helping them shape their own personalities.

According to the group, the decision to have the students resort to hostel facilities further puts them in danger of falling deeper into further  delinquency and  harm from society arguing a positive discipline  strategy must reform offending students rather than expose them to even higher levels  of delinquency and truancy.

He challenged the Ghana Education Service, GES to take a second look at de-boardinization as a form of punishment for students and adopt progressive sanctions that actually reform offending students.

Children rights group, Child Online Africa while expressing surprise at the decision to expel the students called for the arrest of the third party who filmed the girls and subsequently shared the video on social media.

According to the group, “the situation presents the Ghana Education Service an opportunity to revive its seemingly ineffective Guidance And Counselling (G&C) Unit which has been charged with a number of roles including collaborating with relevant partners including parents to meet the psychosocial needs of pupils/students, and also the need for GES to devise mechanisms that will tackle the so-called new normal in the era of digitization.”

But director General of the country’s education service, Prof Kwasi Opoku Amankwa said the decision taken by the school is in line with rules set by the GES.

Prof Amankwa disagreed with concerns that stripping students of their boarding status leads to further delinquency.

He further justified the decision stating stripping them of their boarding status will prevent other students from being corrupt.

“There is no turning back on the decision taken. As far as we are concerned they went through the rules and regulations of the GES. If they decide to live in hostels, it would be the decision of their parents.

Addressing concerns of the disciplinary measures of the GES, Prof Amankwa said there was no problem with the measures.

According to him the current system follows a series of procedures which result in a decision to de – boardinize or not.

“It is all a package, and as part of the package whatever counseling that needs to be done. But we also wants parents to take responsibility as part of the upbringing so that we can all reform the children and bring them to the level that we all need.”