Officials in Spain’s north-western region of Galicia have re-imposed restrictions on an area of 70,000 people following a Covid-19 outbreak.

Only those travelling for work will be allowed to leave or enter the coastal district of A Marina from midnight on Sunday to Friday.

The move comes a day after the north-eastern region of Catalonia imposed a similar local lockdown.

Nationally, Spain’s outbreak has been essentially brought under control.

The country has recorded more than a quarter of a million cases and at least 28,385 deaths. But daily fatalities have been in the single figures for most of the past three weeks.

Spain has been reopening its borders to other EU states, as well as the UK, in anticipation of summer holiday traffic.

What is happening in Galicia?

Regional health officials announced on Sunday that travel in and out of A Marina would be severely restricted for five days – although people would remain free to move around the area.

Gatherings will be limited to 10 people. Face masks will be mandatory outdoors. 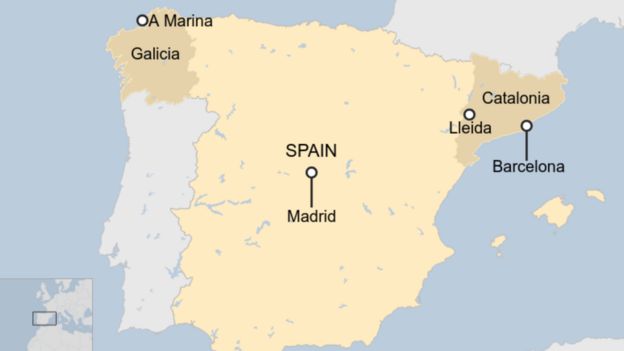 Officials linked local outbreaks to bars in the area. Capacity in bars and restaurants will be limited to 50%.

There are now 258 cases of Covid-19 in Galicia, including 117 in Lugo province where A Marina is located, authorities say.

On Saturday the autonomous government of Catalonia re-imposed controls on an area of 210,000 residents after a sharp rise in infections there.

Catalan President Quim Torra said no-one would be allowed to enter or leave Segrià, a district west of Barcelona that includes the city of Lleida.

Catalonia is one of the Spanish regions worst affected by coronavirus.

As of Friday, the region of 7.5 million people had recorded 72,860 confirmed Covid-19 cases and 12,586 deaths, accoding to an official news agency.