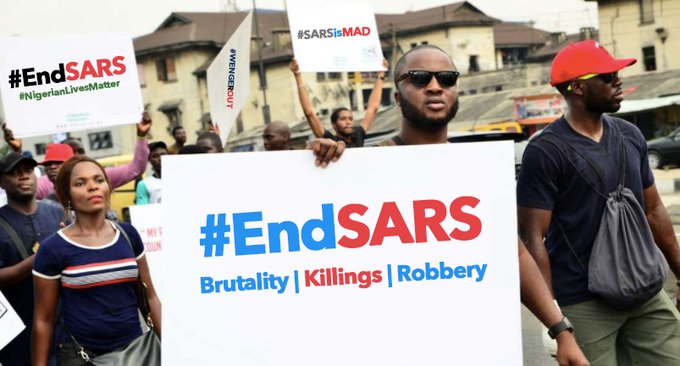 The country’s Inspector-General of Police, Mohammed Adamu in a statement also banned personnel from other tactical squads from carrying out routine patrols.

Those units include the Special Tactical Squad, Intelligence Response Team, Anti-Cultism Squad, and other squads operating at the Federal, Zonal, and Command levels.

The hashtag #EndSARS has been trending on Twitter following reports of alleged killing of a young man by officers from the SARS unit in the city of Lagos on Saturday.

Citizens are calling for an end to police brutalities using the hashtag to share stories of their experiences.

The police statement on Sunday said “no personnel of the Force is authorised to embark on patrols or tactical assignments in mufti. They must always appear in their police uniforms or approved tactical gear.”

The police units have also been banned from “invasion of privacy of citizens particularly through indiscriminate and unauthorised search of mobiles, laptops and smart devices”.

There have been reactions on social media following the news of the SARS police unit being banned from its duties.

Women not just men are also victims of SARS/Police brutality. We all need to be united to #EndSARSBrutality and also call on the @NigeriaGov to #EndSARS. The IGP BANS FSARS, is not enough! He should #EndSarsNow. We shouldn’t fall for this momentary relieves. #EnoughIsEnough pic.twitter.com/tLys3Mylk9

The #EndSARS campaign continues, till the value system driving the treatment of citizens with indignity by police units and public officials changes. Public officials must use power to serve citizens, not to intimidate and exploit them. This is one restructuring we really need. https://t.co/AwejmKOI2A

Everytime you watch this you just feel his pain ?. . A man would train his child to become a man, only for him to be killed by SARS #endSARS#EndSarsNow #EndSARSBrutalitypic.twitter.com/KGqtxx04rO

SARS is killing your brothers and sisters left, right and centre and what you want to tweet about is @Arsenal? What’s the matter with you? Arsenal don’t even know you exist, meanwhile SARS wants to stop you from existing. Focus on your survival before your pleasure #EndSARS

Year after year we trend the hashtag #EndSars and they make a twitter publication to calm us and then nothing is done. I’ve nearly been shot by this men before and I’m tired of living in fear, I’m ready to take to the streets in peaceful protest…Enough is Enough