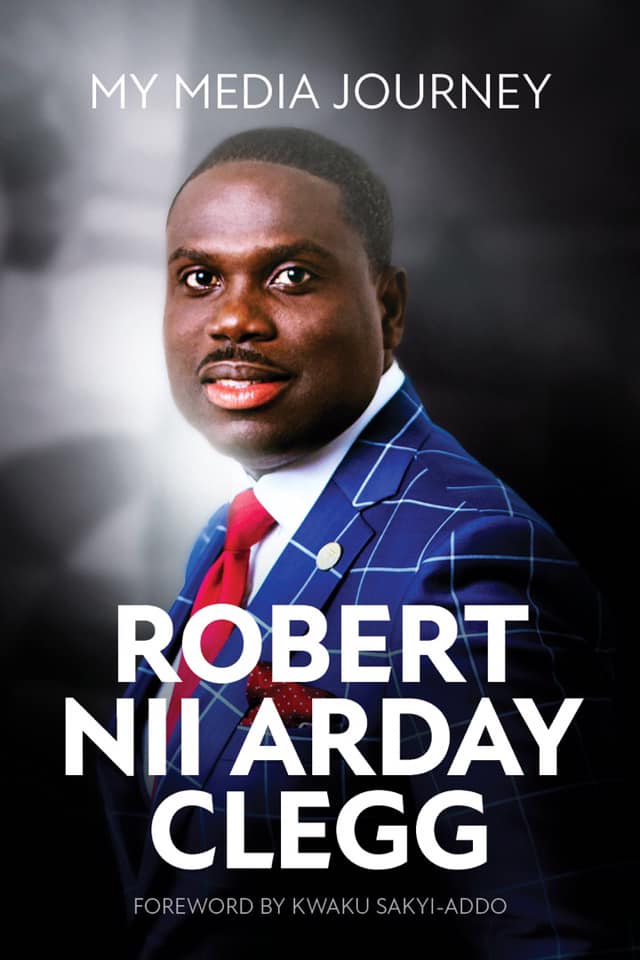 This exciting and exhilarating book is dedicated to Robert’s mother, “Auntie Christie.” The author is unabashed, forthright, says it as it is, takes no prisoners, and bars no holds.

We are transported through an unfulfilled desire to study in Warwick University, twice unto the beautiful campus of the University of Ghana, through the Ghana School of Law and then into Harvard. But the focus at all times is the media experience.

Robert writes with dexterity and delivers the pleasure of a whiplash, in fact, repeated whiplashes, marked by three notorious dots that litter the book and serve as breakers within the chapters.

Admitted to study English, Drama and Linguistics at Legon, Robert morphs into a Political Science, Philosophy and Psychology student, and before we can have another intake of air, he pays a visit to the then not-too-impressive buildings of the Faculty of Law and almost becomes a law student. But that was to be deferred for a later and probably more appropriate time. Lesson: Fortune Favours the Brave!

The path seems to have been laid down for him in pleasant places. He meets the heavy NGO hitters of the time, Professors Gyimah-Boadi, Baffour Agyeman-Duah and H Kwasi Prempeh with both excellent academic grades and an excellent grasp of real day-to-day issues. Lesson: Fortune Favours the Prepared, Plan Your Luck!

He interviews Presidents Rawlings and Mills, and Nana Akufo-Addo who would become President of Ghana, and later Ex-President Kufour. I must end the list here. This book names names, plenty names!

Prosper Harrison Addo convinces Robert to appear regularly on Radio Univers to discuss sports. Robert does another pleasurable three-dotted whiplash and now we are discussing his illustrious father, Sam Clegg, who like all caring dads was worried about this gallivanting son, a worry that is only calmed when Robert makes it to the Vice-Chancellor’s Honours List.

Robert gets recruited through Kwame Baah-Nuakoh’s efforts to Radio Gold, a station he had not listened to before. He gets interviewed by a “neither friendly nor unkind” Kwami Sefa Kayi and a “smiling” Yvonne Andoh. Later, the boss, the venerable Kwesi Sainti Baffoe-Bonnie (Babo) of immediate blessed memory would invite him to start work without an appointment letter.

He interviews Professor Mike Oquaye and asks him to justify his praise of Jerry Rawlings in his book. Kwaku Baako is impressed. An interview with the chair of the station’s board, Ato Awhoi, would result in unintended consequences.

His list of interviewees is absolutely top drawer, including the likes of Kojo Bentsi-Enchill and Kwame Pianim. Literally, he has interviewed everyone who was or became somebody in Ghana’s polity. When he interviewed Dr Benjamin Kumbour, he mixed up vicarious liability with criminal liability, which left him fleetingly concerned about hurting his course of study. Later, he sat in Kumbour’s class and topped it. That’s life!

Robert demands to be put on the breakfast show, saying to Babo: “I’m the best… I will transform this station.” It is really sad that Babo, who was close to Robert to the end, was “called home to meet his maker” some weeks ago.

In Chapter 5, Roberts goes to work with the Chairperson of the First Respondent, Jean Adukwei Mensa’s Institute of Economic Affairs. Robert, you have interacted with both Jean and Tsatsu Tsikata: please tell us how you think the cross-examination would have gone. You, more than anyone can tell whether it would have been adventure, comedy, crime, drama, fantasy, history, horror, musical, mystery, romance, sci-fi or war. Alas…we may never know!

Robert re-enters Legon to study Law, but he still meets and/or interviews top newsmakers. In all of these, he comes out tops, not in a straight line but zigzaggedly, with ups and downs, ducks and jinks, twists and turns, wriggles and squiggles, flexuosity and meanderings, bobbing and weaving becoming itinerant and wandering with jactitation and vertiginous drops.

Speaking of Legon, he misses out on his second First-Class degree, despite being adjudged as the Best Graduating Student in Law. He is so upset that he skips the Congregation, but he still gets the degree.

When legal work starts, Robert joins Reindorf Chambers because he admires his former lecturer’s intellect and University of Oxford credentials, and also because they offered to pay him 25% more than another firm had offered. I think that I work with the other firm that offered him 25% less.

In Chapter 8, he interviews an upstart called Ace Ankomah. The interview was not telecast until sometime later. It was then that Robert must have discovered that that Ace character was so sympathetic to the government that he sued the government-owned Ghana Broadcasting Corporation (and by implication, the Government he supported) on behalf of his client, Eva Lokko.

Buy the book and discover as much fun and excitement as I have. Some of the stories might make you recoil and say “ouch,” or ask, “couldn’t he have edited that out?” He started with the “Univers” at his feet and ended up a “Starr.” I can only guess that his lapel pin on the cover photo, reads, “Harvard University.”

Opinion: How will economic downturn affect health investment in the Africa?