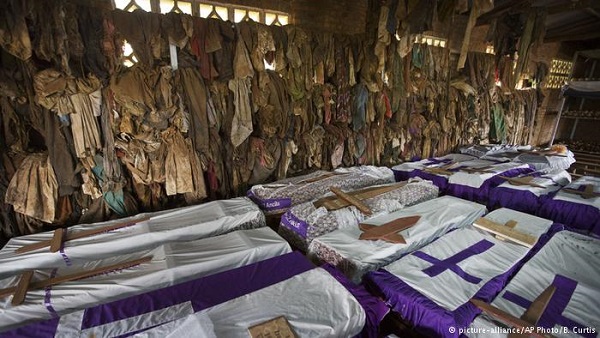 A report published by French historians has concluded that France bears “heavy and overwhelming responsibilities” in the 1994 Rwanda genocide.

The report however said there was no evidence of French complicity in the tragedy but said France was “blind” to the preparations towards the genocide.

Published on Friday the report said “France failed Rwanda” between 1990 and 1994 and exhibited blindness to the “racist, corrupt and violent” regime.

The expert commission presented the report to French President Emmanuel Macron on Friday.

Assassination of a president

The massacres occurred after the assassination of the then Rwandan president Juvenal Habyarimana on April 6, 1994 in a plane crash.

Habyarimana was killed when his plane was shot down. Tutsi rebels, led by current president, Paul Kagame were accused of carrying out the attack resulting in some arrests.

In 2018 French investigators ended their probe into the attack that largely triggered the genocide.

Investigators in France have been probing nine officials from Rwanda following the killing of Juvenal Habyarimana.

The charges were dropped reportedly over insufficient evidence. Relatives of the french crew killed in the incident demanded a probe.

President Macron in May 2019 ordered the creation of the commission to analyse France’s role in Rwanda from 1990-1994 through archival research.

The latest report concluded that in July 1994 “murderers but also the masterminds of the genocide” were in a safe zone established by French forces in the west of the country “who the French political authorities refused to arrest.”

The report said the responsibility laid on the former socialist president François Mitterrand, who was in office at the time of the genocide.

France says it hoped the report will help develop and improve relations with Rwanda.

“We hope that this report will be able to lead to other developments in our relationship with Rwanda” a statement from the presidency read.

It added that “This time, the process of rapprochement can be started in an irreversible way.”