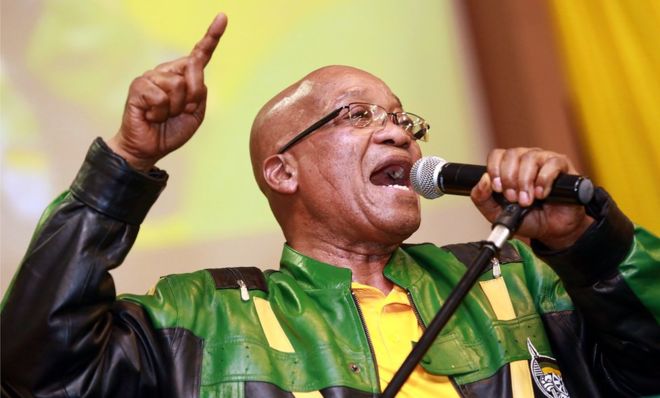 Former South African president Jacob Zuma has said that the apartheid government treated him better than the current one.

Mr. Zuma was last week found guilty of contempt of court and sentenced to 15 months imprisonment.

The verdict was delivered by the country’s constitutional court after the ex-president failed to appear and participate at the state capture inquiry.

He had until last Sunday to hand-over himself to authorities to be processed for prison but Mr. Zuma says he won’t do that.

He told journalists that he had always fought against injustices and was surprised he was sentenced to prison “without trial”.

Mr. Zuma said going to jail without trial was something he fought against during the white-minority apartheid rule.

The former president said he believed courts were being used by his political opponents to settle scores.

Hundreds of his supporters camped outside his home to stop him from being arrested.

Throngs gathered outside #JacobZuma’s #Nkandla homestead have vowed thwart any attempts to arrest him. @NkoRaphael pic.twitter.com/7YgTG77xg0

“The reaction of the people tells the story that they’re not happy with what the court has done, which I think must tell all of us that we must always do things correctly, we must not provoke people,” Zuma said in reaction to the love from his supporters.

The ex-leader has revealed that he will not comply, after the constitutional court agreed to hear his application to have the judgement rescinded.

He called on his lawyers to make sure that justices of the Constitutional Court recognized the errors in their judgement.

Mr. Zuma since leaving office in 2018 has been facing several corruption allegations and had appeared before a commission investigating the state capture scandal.

The scandal involves businessmen accused of conspiring with politicians to influence the decision-making process.

Zuma made one appearance at the inquiry in 2019 but then refused to appear subsequently.

The inquiry headed by Justice Raymond Zondo then asked the Constitutional Court to intervene.

The court said Zuma is not an ordinary litigant and since he is a former president, he wields a lot of political power.