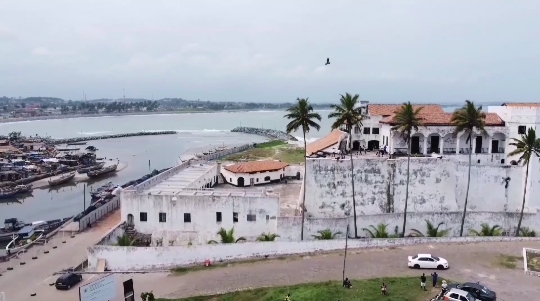 In present day Ghana, Elmina remains only a shadow of itself and an average community in the Central region however it was in this same community that Europe made its historic contact with Africa centuries ago.

The first Portuguese sailors that arrived on the coast of Elmina documented their observations, recording that even the lowest ranked people in this society were adorned with pricey gold jewelry. This would lead them to adapt the name “El mina” for the place, meaning the coast of the mine in the Portuguese language.

Europe’s gold trade with Elmina would soon follow, vital to Europe’s economy at the time and would also be foundational to modern history due to the series of events it would lead to. History that has been long forgotten. Elmina also hosts the first slave castle to be built in Africa, it is truly a place rich in history and culture.

Seyram Agbleze hopes his latest project can drive some public education and conversations about Africa’s unsung contributions in shaping the modern world. Gold Coast Elmina is a short film on how Africa’s gold changed the world.

It is the latest addition to the author’s “A Forgotten People” body of work which was recently honoured by USA’s Undocublack Network on black history month for uplifting black voices.

The documentary is available for viewing here: