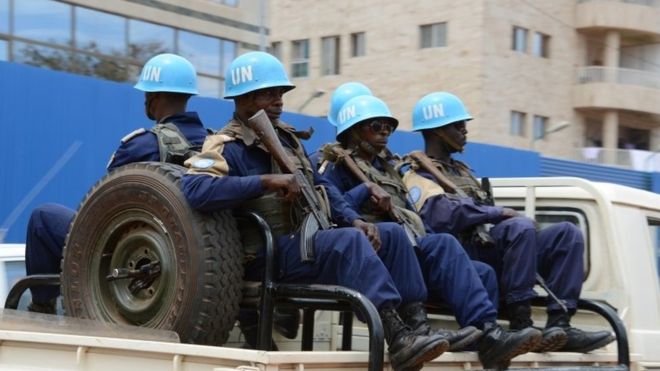 Three people have been killed during protests against the UN peacekeeping mission in Central African Republic.

Peacekeepers opened fire when demonstrators tried to force their way into the UN headquarters, says a BBC reporter, who saw three bodies being taken away in a police vehicle.

A group of Central Africans wants the UN mission to withdraw, saying it is failing to protect people.

The peacekeepers were deployed after civil war which broke out in 2013 when then-President Francois Bozize was ousted by mainly Muslim Seleka rebels.

But it has been hit by several allegations that its troops have been sexually abusing children.

A coalition of civil society organisations called on residents of the capital, Bangui, to stay at home in protest at the UN mission in the CAR, known by its French acronym, Minusca.

The coalition says Minusca is supposed to protect civilians and tackle armed groups in the city.

“But wherever the UN forces go there is violence,” protest organiser Gervais Lakosso told the AFP news agency.

The BBC’s BBC Max Allaroum in Bangui says the deadly shooting took place at the main square in Bangui, not far from the UN headquarters.

The UN soldiers tried first to disperse the protesters by shooting in the air. They then shot at the crowd when it became more agitated and advanced on the building.

Minusca spokesman Vladimir Monteiro told our reporter the UN only fired of tear gas to disperse the demonstration.

Another UN official told Reuters news agency there had been a brief exchange of fire with unknown gunmen but did not confirm any casualties.

Numerous armed group still operate across the country – both Seleka and Christian self-defence forces set up to tackle them, known as anti-Balaka.