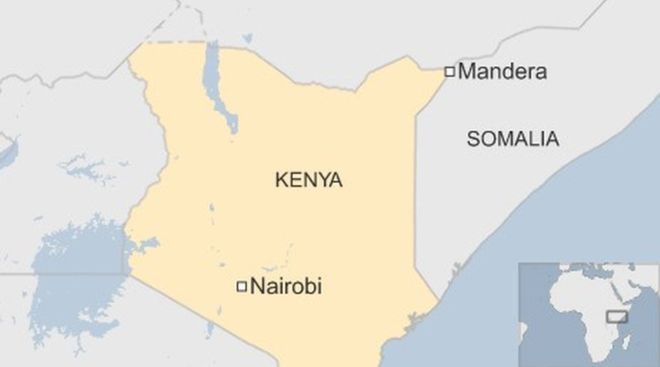 At least 12 people have been killed in an attack in Kenya believed to have been carried out by Islamist militants from Somalia.

Police in the Kenyan border town of Mandera said the attackers – thought to belong to al-Shabab – used explosives during the overnight attack.

The main target appeared to be a guesthouse in the north-eastern town.

It is the latest in a spate of deadly attacks targeting Christians in the mainly Muslim region.

Pro-Shabab media outlets say the latest incident “killed Christian Kenyans” who were not from the local area.

The dead included 10 people who had travelled to Mandera to stage performances in schools relating to books on the curriculum, the Daily Nation newspaper reported.

Earlier this month, al-Shabab militants killed six people in an attack the group said was aimed at forcing Christians out of the area.

Mandera borders Somalia, making it vulnerable to attacks from militants based there. The militants usually cross the porous border, carrying out deadly attacks on civilians and security agents before fleeing back.

Muslims in the north east increasingly see al-Shabab as a threat to their own interests and are making a concerted effort to improve relations with Christians living there.

Many of the Christians are skilled workers from other parts of Kenya, making a vital contribution to hospitals and schools. The north east is one of Kenya’s poorest areas and, if they are driven out, public services will worsen.

Al-Shabab, based in Somalia, is affiliated to al-Qaeda.

The group has been at war with Kenya ever since Kenyan forces entered Somalia in October 2011 in an effort to crush them.

Kenyan troops are now part of the African Union mission in Somalia.

The militants have lost control of most Somali towns and cities in recent years but still control rural areas in southern and central Somalia.