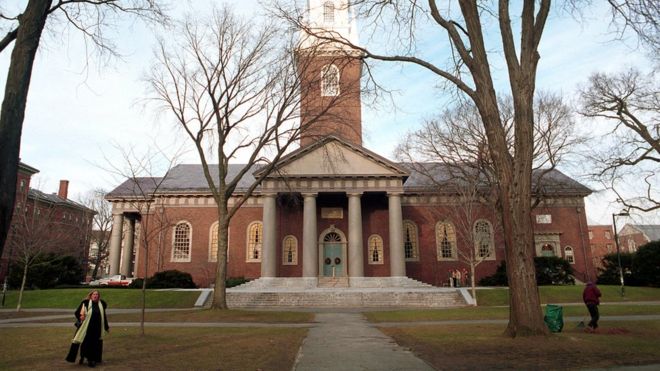 Harvard University has suspended its men’s soccer team after players made sexual comments about members of the women’s team.

A document uncovered by Harvard’s student newspaper included ratings of the attractiveness of female players as well as sexually explicit comments.

The team, currently in first place in the Ivy League, will forfeit the rest of its games this season.

In what reports indicate may be a yearly tradition, male soccer players at Harvard circulated documents with pictures of their female counterparts, rating their attractiveness from one to 10 and giving reasons for their decisions.

They also noted which sexual position they thought the women in question would prefer.

Until recently, the Harvard Crimson newspaper reports, documents from 2012 were publicly accessible through a former team’s Google Group.

Ms Faust said an investigation had found that the tradition had continued to the current season.

She wrote that she “was deeply distressed to learn that the appalling actions of the 2012 men’s soccer team were not isolated to one year or the actions of a few individuals”.

Ms Faust wrote in a statement: “The decision to cancel a season is serious and consequential, and reflects Harvard’s view that both the team’s behaviour and the failure to be forthcoming when initially questioned are completely unacceptable, have no place at Harvard, and run counter to the mutual respect that is a core value of our community.”

Last week after the original story came out, the female players in question said they were “appalled that female athletes who are told to feel empowered and proud of their abilities are so regularly reduced to a physical appearance”.

In an opinion piece published in the Crimson, they said: “More than anything, we are frustrated that this is a reality that all women have faced in the past and will continue to face throughout their lives.”

The university’s director of athletics, Robert Scalise, said: “It’s very disappointing and disturbing that people are doing this.

“Any time a member of our community says things about other people who are in our community that are disparaging, it takes away from the potential for creating the kind of learning environment that we’d like to have here at Harvard.”

The men’s soccer coach Pieter Lehrer wrote in a statement to the Crimson that the team was “beyond disappointed that our season has ended in this way, but we respect the decision made by our administration”.