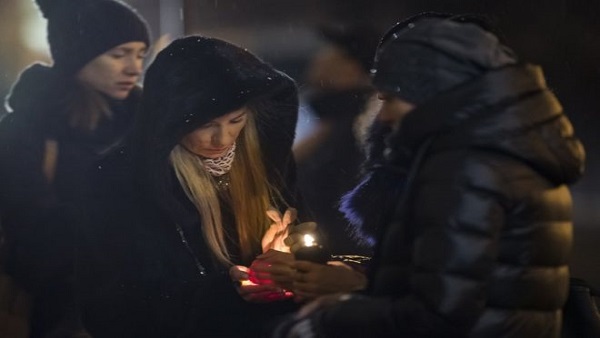 Flowers have been laid outside the Alexandrov Ensemble building in Moscow. Photo Credit: AP

The flight data recorder of the Russian military airliner which crashed in the Black Sea on Sunday has been found, Russian officials say.

It is the first “black box” to be found from the Tu-154 jet, which came down with the loss of all 92 passengers and crew.

The plane crashed soon after take-off from an airport near the city of Sochi.

It was carrying artistes due to give a concert for Russian troops in Syria, along with journalists and military.

The search for victims’ bodies is continuing, with one unofficial report on Tuesday saying the remains of 16 people had been found so far.

The plane disappeared from radar two minutes after taking off from Sochi’s Adler airport at 05:25 (02:25 GMT) on Sunday, heading for Latakia in Syria, the defence ministry said.

The flight had originated in Moscow and landed in Sochi for refuelling.

It was carrying 64 members of the famed Alexandrov military music ensemble, as well as one of Russia’s best-known humanitarian figures, Yelizaveta Glinka, known as Dr Liza, executive director of the Fair Aid charity.

The Alexandrov Ensemble had been scheduled to perform a New Year’s concert at Russia’s Hmeimim air base near Latakia.

Russia has been carrying out air strikes in support of Syrian government forces who are battling rebels opposed to Syrian President Bashar al-Assad.

The flight data recorder was found by a Seaeye Falcon underwater remotely operated vehicle at a depth of 17m (56ft), 1,600m from the shore, the Russian defence ministry told Russia’s Ria-Novosti news agency.

An unnamed source involved in the search told another news agency, Interfax, that the recorder had been taken to the surface, and that “visually, it is in good condition”. It would be taken to Moscow later on Tuesday for examination.

According to the same source, the location of a second black box had also been established and it could be recovered shortly.

There have been few clues as to the cause of the crash although Transport Minister Maxim Sokolov has played down the possibility of a bomb attack.

He reiterated that investigators were looking into whether pilot error or a technical fault might have brought down the aircraft.

A source close to the investigation told Interfax the plane may have been overloaded.

“Witness accounts and other objective data obtained during the investigation suggest the plane was unable to gain height and for some reason – possibly overloading or a technical fault – crashed into the sea,” the unnamed source said.

According to an Aviation Safety Net report, the plane made a U-turn back towards the coastline shortly after take-off, before disappearing off the radar.

But audio recording played on Russian media and said to be of the final conversation between air traffic controllers and the plane reveals no sign of any difficulties.

Voices remain calm until the plane disappears and the controllers try in vain to re-establish contact.

The Tupolev airliner involved in the crash was an old model no longer flown by air lines in Russia but still used by the military. It was 33 years old.

Russia observed a day of mourning on Monday for the victims.

Prayers were said in the country’s Russian Orthodox Christian churches and a makeshift shrine was set up in Moscow outside the headquarters of the Alexandrov Ensemble.

One woman who came to the building to pay her respects told Reuters news agency: “This is Russia’s best choir.

“I come from the Republic of Sakha [Yakutia]. They had performed in my hometown six times… I do not know what to say. Words cannot express my feelings. Sorrow is the only thing left.”

Mourners in Moscow have also been laying flowers outside the headquarters of Fair Aid in memory of Dr Liza, who had been on the plane to deliver medication to a university hospital in Latakia.

In the Russian capital, she is mostly remembered for feeding, clothing and providing medical care to the homeless people who sleep in train stations.

Ghana's chief justice, Kwasi Anin-Yeboah has gone into self-isolation in compliance with Covid-19 protocols. According to a circular to high court judges, the chief justice...
Read more
Religion & Culture

At least 180 bodies found in mass graves in Burkina Faso

At least 180 bodies have been found in common graves in Djibo, a town in the north of Burkina Faso, Human Rights Watch (HRW),...
Read more
- Advertisement -

Tanzania's President John Magufuli has been endorsed by his ruling party as the candidate for upcoming presidential polls. Magufuli was endorsed at a National Congress...
Read more
Relationship & Lifestyle

How to Anonymously Top Up Your Casino Balance

Many players get afraid at least once in their gambling career about using their debit cards or provide their bank details while making a...
Read more