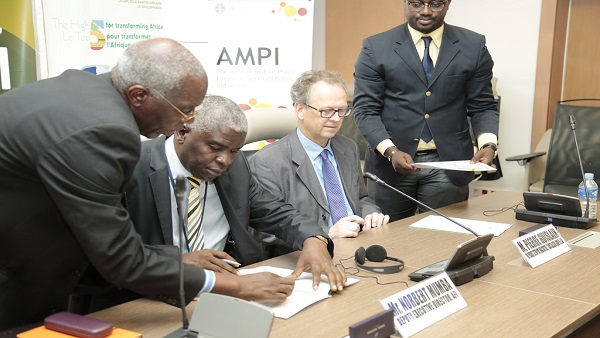 Officials of the AFDB and AFI signing the MoU. Photo Credit: Fred Dzakpata.

Two Financial Institutions on the African continent have signed a memorandum of Understanding to enhance access to quality financial service in Abidjan, Côte d’Ivoire.

The two are the African Development Bank and the Alliance for Financial Inclusion, AFI. The move seeks to close the financial inclusion gap on the continent. Currently about 350 million people are excluded from formal financial services.

This includes approximately 125 million farmers that receive cash payments for the sale of agricultural products owing to lack of access to quality and appropriate financial services.

Speaking at the signing of the MoU , AFDB Vice-President for Private Sector, Infrastructure and Industrialization, Pierre Guislain said, “The Bank will leverage its resources to support AFI’s efforts on digital financial services, agricultural and SME sectors as well as gender.

It will prioritize capacity building and knowledge sharing activities and nourish the dialogue for Africa’s policy-makers through global events and activities.”

On his part the, AFI Deputy Executive Director, Norbert Mumba said, “Engaging with the AFDB to scale up and deepen financial inclusion in Africa has always been seen as a natural move for AFI in Africa, as it believes that AFI and the AFDB share the same objective of alleviating poverty and improving living conditions on the African continent.

AFI considers the signing of this MoU as an important step toward improving in-country implementation of policies in African countries and making progress in achieving that crucial objective.”

The two institutions are seeking to develop this further through initiatives such as the African Mobile Phone Financial Services Policy Initiative and digital financial inclusion, where AFI members have been ahead of the curve for almost a decade now.