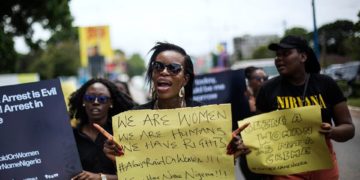 The group of women from diverse background embarked on a protest on the streets of Ghana’s capital Accra against the Nigerian Police Force. 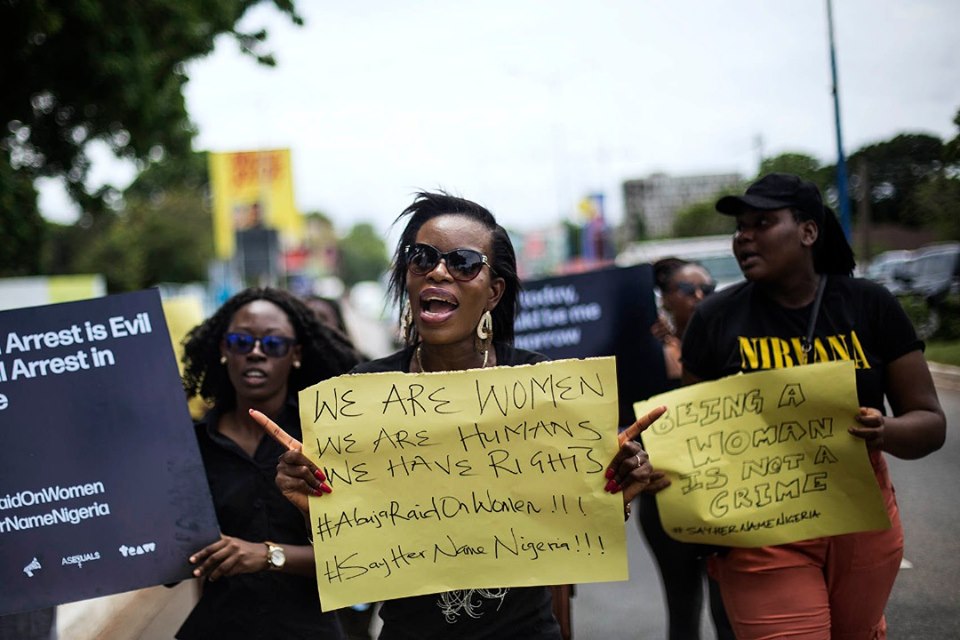 The protest in Accra is meant to put pressure on the Nigerian government.

A group of Ghanaian and Nigerian women are piling pressure on Nigeria’s government to end what it calls culture of assault on women by Police in Nigeria.

The group of women from diverse background last weekend embarked on a protest on the streets of Ghana’s capital Accra against the Nigerian Police Force.

They allege that the police in Nigeria unlawfully arrests and assault women in Nigeria especially the capital, Abuja.

The Abuja police last month raided bars, clubs, and lounges rounding up over 100 women for engaging in prostitution.

The women, who were arrested and detained for several days were taken to a mobile court and allegedly pressured to plead guilty to charges of prostitution on the spot.

Several of the women were sentenced to a month imprisonment with an option to pay an $8 fine (N3,000).

According to the victims those who could not afford the fines were assaulted by the police.

Some of the arrested women accused police officers of rape. The placards displayed by the protesters had inscriptions that read; “Unlawful Arrest is Evil”, “Women’s Rights Are Human Rights”, “Don’t rape us protect”.

Others read; “Her Today, Could Be Me Tomorrow”, “To Be A Woman Is Not A Crime”, “Sex for bail is rape”, “My dressing is my choice”.

These inscriptions were chanted by the protesters throughout the march. Addressing the media during the protest, a Convener of the protest who is a representative of The Eyes of African Women (TEAW) Fatima Derby described the action of the Nigerian Police Force as shameful.

She said “We hear our Nigerian sisters and we march in solidarity with them because gender-based violence is a human rights violation that women everywhere suffer.

This situation is shameful and we call on the Nigerian government to investigate the matter and ensure that the perpetrators are brought to book. The police are supposed to protect women, not molest and assault them”.

The march ended at the premises of the Nigerian High Commission in Accra.

The co-convener for the protest and a representative of Stand to End Rape Initiative Adaku Ufere-Awoonor stated the injustice done the women cannot be allowed to go unanswered.

Ufere-Awoonor said “We are here to tell the Nigerian High Commissioner to go and tell the Federal Government of Nigeria that No means No, that we are tired of being raped and assaulted. We will no longer sit still while our bodies and autonomy are constantly violated by patriarchy.”

She added, “Each and every single one of us is valid and deserving of respect. Not one woman is better than the other. Because we are all bound by the same shackles in different degrees, and until all of us are free, none of us is free”.

The protest in Accra follows a similar one in Abuja by women making same demands of the Nigerian government.

The protests are being organized by several women rights groups in 3 countries; Nigeria, Ghana and the United Kingdom.

The protests and social media campaigns with the hash tag #AbujaPoliceRaidonWomen are aimed at getting justice for the over 100 women arrested in Abuja over prostitution allegations.

The Police in Nigerian have however promised action against officers found culpable in the rape allegations. Abuja police spokesman Gajere Tanimu in a statement said that the department is taking the rape allegations against the task force seriously and investigations are under way.

“The command wishes to assure members of the public of its zero tolerance for unprofessional disregard to human rights and stiff punishments will be meted out to erring officers”.

The statement also noted that “a high-powered team was constituted to investigate the veracity of the allegation” against police.

“In this regard invitations were sent out to relevant individuals that may assist in getting to the root of the matter.”