Ghana: Illegal logging of Rosewood and the Chinese touch 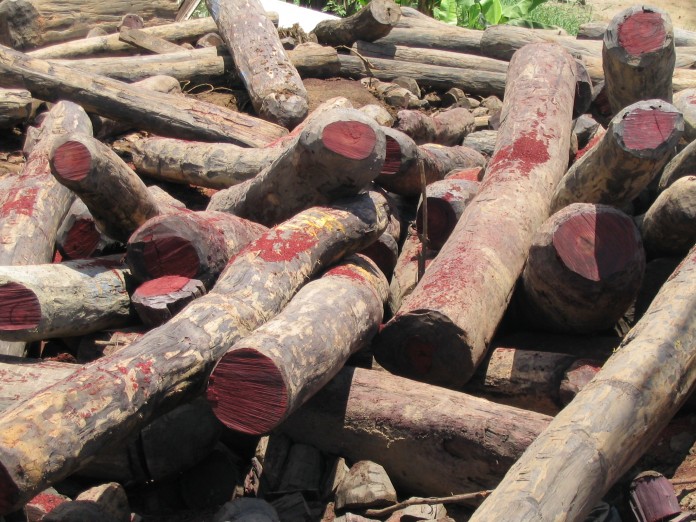 Authorities in Ghana are struggling to control the illegal logging of rosewood despite a ban on the harvesting of the precious tree.

Rosewood has been classified as endangered plant given its economic value.

Ghana’s Lands and Natural Resources Ministry in March this year placed a total ban on harvesting and exporting of rosewood.

Minister for the sector Kwaku Asomah-Cheremeh consequently directed Ghana’s Forestry Commission to suspend the processing of permits for the exportation of rosewood.

The ban first introduced in 2014 was to address the environmental destruction the indiscriminate felling of the tree has visited on communities.

The ban has done very little to control the felling of rosewood in the middle belt and Savanna regions of Ghana where the species thrive.

The illegal activity continues unabated with the police occasionally impounding trucks loaded with rosewood logs in the Northern part of the country.

In an interview with Africa Feeds Minister for Lands and Natural Resources Kwaku Asomah-Cheremeh conceded that the fight against illegal logging of rosewood will be ineffective without the buy-in of stakeholders.

The minister disclosed that huge quantities of the lumber were being impounded in spite of the ban.

The chiefs claim that they own the land and for that matters the trees are theirs and they grant the opportunity for people to go and fell them.

Some Assemblymen and also complicit in this particular thing, they manage to smuggle these tress or lumber through other ends and they land at the ports for same to be exported.”

A major destination for the lumbered rosewood is China. Rosewood is highly valued outside Africa where the wood is used for antique-style furniture and building of Yachts among other uses.

This explains the increased presence of Chinese engaging in illegal felling of the tree in Ghana.

In May this year a 46-year-old Chinese woman identified as Helen Hyuan was arrested in the Northern Regional Capital of Ghana, Tamale for attempting to smuggle large quantities of endangered Rosewoods lumbers.

The Chinese woman who evaded multiple security checkpoints before her arrest was released by the police on bail.

Helen Hyuan however disappeared without a trace from the police. She is suspected to have fled back to China.

Weeks after the incident another Chinese national was arrested by the police in Tamale with trucks carrying containers of rosewood lumbers.

The trucks were detained at the regional police headquarters after they were intercepted coming from Tumu, in the Upper West region.

The suspect’s name was only given as Mr. Hu. The sector minister attributes the involvement of foreigners especially the Chinese to unavailability of local market.

“The rosewood itself in a way is difficult to be used locally over here given the nature of it.” Asomah-Cheremeh said.

However, some companies were issued with permits by the Forestry Commission to deal in rosewood until the ban was reintroduced.

In 2017, for instance the Ministry of Lands and Natural Resources issued permit to 25 companies to salvage rosewood from the Upper West, Upper East, Northern and Bono-Ahafo regions.

Security and Forestry Commission officials have been indicted for aiding the smuggling of rosewood lumber by accepting bribes.

For instance officials of Ghana’s Economic and Organized Crime Office (EOCO) and members of the Special Operation Team of the Ghana Revenue Authority (GRA) once clashed over five containers of rosewood being allegedly smuggled out of the country.

The confrontation, which nearly turned into fisticuffs, was over which of the two institutions the authority to investigate the case has.

The impounded trucks were from the Volta region of Ghana heading to Tema Port for export when they were intercepted.

The sector minister has conceded security officials and other stakeholders are complicit in the illegal activity.

Asomah-Cheremeh said “They had more of these rosewood bigger quantities than what was even arrested yesterday. We cannot say that the security officers are saints in these circumstances.

But we implore these security officers to assist…some Assemblymen and also complicit in this particular thing, they manage to smuggle these trees or lumber through other ends and they land at the ports for same to be exported.”

A Ghanaian journalist Bernard Nasara Saibu who took on the task of exposing persons behind the illegal logging of rosewood in the 3 regions up North of Ghana met stiff resistance.

At a point local players in the business offered him bribe to drop the matter. He however resisted the temptation and stood his ground.

Crusade against felling of Rosewood

Some civil society groups and individuals have been waging a strong campaign against logging of rosewood especially in the savannah regions.

Executive Director for Community Development Alliance, CDA-Ghana, Salifu Issifu Kanton whose organization has been fighting against the harvesting of rosewood has had  cause to blame chiefs in the affected areas for their role in the wanton destruction of the ecology.

Another loud voice in the fight against the development is a legislator representing the Builsa South constituency, Dr. Clement Apaak.

Speaking to Africa Feeds after the announcement of the recent ban, the Member of Parliament argued that the move will not stop the phenomenon if politicians complicit in the illegal logging are not fished out and dealt with.

Minister for Lands and Natural Resources, Kwaku Asomah-Cheremeh has described the phenomenon as “a national security threat” and appealed to the public “to support the ministry in our efforts to regulate the exploitation of natural resources in this country.”

There have been clashes in communities over lumbering of rosewood leading to lose of lives.

In February 2019, Police in the Upper West Region of Ghana arrested two people in connection with clashes in a town called Funsi in the Wa East municipality which led to the death of two people.

The clashes ensued when some residents, acting on the orders of the assemblyman attempted to prevent some illegal lumberers from felling rosewood.

The sector minister has disclosed some companies whose lumbers have been impounded have been asked to pay penalties for their consignments to be released for export.

He said “Those that were impounded and brought to Accra or those who were arrested en route to Tema and sent to the Forestry Commission headquarters at Achimota, I did the inspection together with the Forestry Commission, we sat down and decided that penalties be paid and those ones released to them for them to export.”

The rosewood business is booming in Ghana as a result of high demands for the lumber in Asian and European markets.

That demand doesn’t appear slowing down any time soon and that means a major challenge dealing with the illegal felling of the tree.