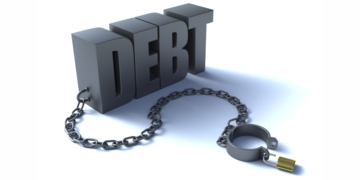 U.S. warns there won’t be another debt relief for Africa

U.S. warns there won’t be another debt relief for Africa

The United States government has given the strongest indication that African countries piling up their external debts won’t be able to access any debt relief.

Many African countries continue to rely on loans and excessive borrowing largely from the West and in recent times from China.

It’s leading development economists said “Almost 40% of sub-Saharan African countries are in danger of slipping into a major debt crisis”.

The World Bank in 2018 also revealed that 18 countries are at high risk of debt distress.

These countries have their debt-to-GDP ratios surpassing 50%. The total amount of external debt for Africa is estimated at $417 billion.

But in the past year China has become the major borrower for African countries.

The Jubilee Debt Campaign, a charity that campaigns for the cancellation of poor countries’ debt has said that around 20% of African governments’ external debt is owed to China.

As the largest single lender nation to Africa, China has a combined state and commercial loans estimated to have been $132 billion between 2006 and 2017.

But multilateral institutions such as the World Bank account for a further 35% of African debt with 32% owed to private lenders.

Debt campaigners however say much of Africa’s current debts are commercial in nature and owed to western financial institutions or Eurobonds.

Those loans or debts are more expensive to service than Chinese loans, according to analysts.

That initiative was to help the world’s poorest countries clear billions of dollars worth of unsustainable debt.

U.S unwilling to give debt relief

U.S. Assistant Secretary of State for Africa for African Affairs, Tibor Nagy told reporters in South Africa that “We went through, just in the last 20 years, this big debt forgiveness for a lot of African countries.

“Now all of a sudden are we going to go through another cycle of that? … I certainly would not be sympathetic, and I don’t think my administration would be sympathetic to that kind of situation.”

The United States has already warned African countries against doing business with China. It claimed that it would be disastrous for Africa to continue to pile up debts from China.

China has already rejected criticism from the likes of USA of its lending in Africa.

But Nagy says “All of these countries are sovereign states, so it’s for them to decide who they want to trade with.

“We feel we have an obligation to point out to them when we believe they are getting into severe economic difficulties.”