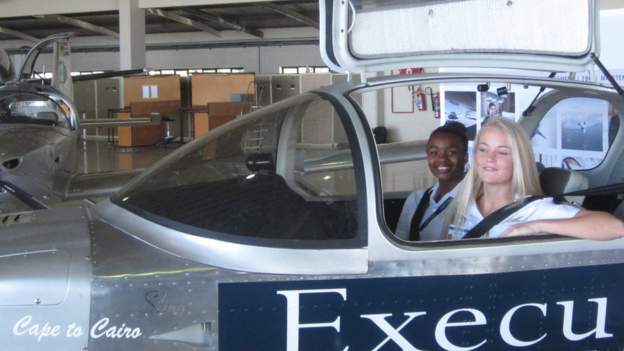 They succeeded in building the aircraft and this month started that journey of traveling across the continent in it. Egypt will be the final destination for the teenagers who have described the tour so far as good.

Megan Werner (R) is one of the pilots and Agnes Keamogetswe Seemela (L) is part of the support team. Photo: U-Dream Global

Twenty South African teenagers teamed up to build their own four-seater aircraft so they can travel across Africa.

They succeeded in building the aircraft and this month started that journey of traveling across the continent in it.

The plan was to fly in the plane covering over 10,000 km across countries like Namibia, Zimbabwe and Malawi.

The group have done so flying through Tanzania, Kenya, Ethiopia and Eritrea and are now set to end the tour by landing in Egypt.

Egypt will be the final destination for the teenagers who have described the tour so far as good.

The teenagers also plan to make a stop in Uganda, Rwanda and Zambia on their way back to South Africa.

17-year-old pilot Megan Werner who is the team leader has said that the trip the team is in good spirits. She adds that flying conditions have generally been good.

The teenagers are from various backgrounds and from all parts of South Africa.

They were supported by an aviation outreach initiative called U-Dream Global.

The program aims to inspire young South Africans. Teen pilot and founder of U Dream Global, Megan Werner told IOL that “When we started building the aircraft, we didn’t know anything about aviation.

We had to learn about all the tools and learning to read the engineering drawings was also quite a challenge.”

Warner promised that in countries they will visit with the plane they intend “giving inspirational talks to the locals.

Warner adds “Will offer them a first time experience on the aircraft because many of these people has never seen or even been on a plane before”.

Fund-raiser manager for the U Dream global Cape to Cairo project, Simon Manda is convinced “These teenagers have built something that will create waves in Africa.

“They are showing everyone what South African youth are capable of even though some of them come from difficult backgrounds.”

Opinion: Ghanaian traders have been pampered too much