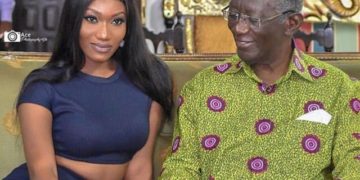 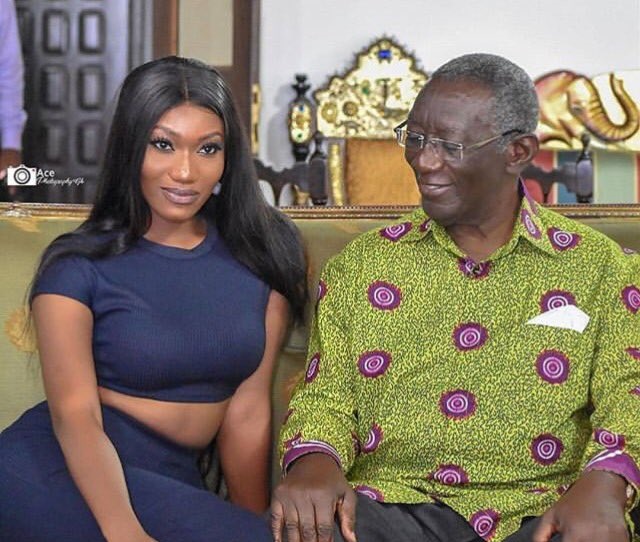 The look of the singer appeared to have become a distraction for the former president.

A Ghanaian singer Wendy Shay has reportedly lost an ambassadorial role with a government agency, after appearing in a photograph with Ghana’s former President John Agyekum Kufuor.

Wendy Shay was accused of looking ‘too sexy’ in the photo which went viral on social media.

In the picture the former president seemed overwhelmed by the look of the singer, which became a distraction for him.

Former President Kufuor could be seen gazing at the look of the artiste during the photo shoot.

The young artiste was criticized on social media forcing her to apologize days after.

In an apology posted on Instagram, Wendy said: “On the 4th of July 2019, I posted an image of myself and His Excellency former President John Agyekum Kufuor on my social media timeline.

This was after I visited him with my fellow Youth Employment Agency Ambassadors officially.

“The image I posted went viral on social media for the wrong reasons and I will wish to render an unqualified apology to His Excellency and the board and management of the Youth Employment Agency.

I had no intention of bringing his good image into any public disrepute. I would wish to apologise to the general public as well with most of the comments being directed to my outfit. I am a young lady and I am still learning. To err is human, to forgive is divine. I promise to do better next time. Once again, I am sorry.”

Other ambassadors who visited the former president for a photograph were praised for looking ‘decent’.

The Youth Employment Agency has just released a revised list of its Ambassadors and omitted the artiste’s name.

On social media Ghanaians reacted to the news of Wendy Shay losing her ambassadorial role.

So Wendy Shay didn’t have an assistant who could have handed her a blouse to wear over her outfit see what its cost her. Smh.

But this Wendy Shay issue dey sad me chale. Whoever’s idea was to make her dress to that place like that is the killer of her dreams and career.

You people making a case for the former president by blaming Wendy Shay’s dressing are the same people who blame women for their dressing when they’re raped. Fucking rape apologists!

The former president was the one who looked at her chest. But Wendy Shay is the one who had to apologize and still lost her deal? Cool. I just want to know when men (in power) will start be being held accountable for being inappropriate too. https://t.co/22S0cIIiGJ

'Confused' Ethiopian athlete stops running with a lap to go