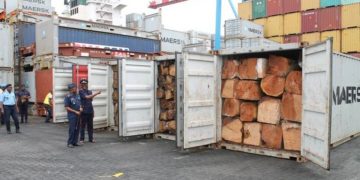 The business is thriving because of the high demand from China.

Ghanaian officials appear to be downplaying the severity of the illegal logging of rosewood in the country.

Rosewood has been classified as endangered plant given its economic value in Ghana, but illegal logging of the tree and it’s exportation to China has been on the rise.

The Environmental Investigation Agency (EIA) last month said in a report that the illegal trade and felling of rosewood trees has continued despite a ban in place since 2012.

It estimates that in the past seven years, some six million rosewood trees had been cut down for illegal export to China.

Government officials considered corrupt have been identified as the key catalyst for the situation as they continue to issue illegal documents.

In a statement the forestry commission said claims that officials do support the illegal trade were false.

The commission also claimed only about 200,000 trees had been cut down and not six million as reported by the EIA.

In an interview with Africa Feeds recently Ghana’s Minister for Lands and Natural Resources, Kwaku Asomah-Cheremeh conceded that the fight against illegal logging of rosewood will be ineffective without the buy-in of stakeholders.

The minister disclosed that huge quantities of the lumber were being impounded in spite of a ban.

The chiefs claim that they own the land and for that matters the trees are theirs and they grant the opportunity for people to go and fell them.

Some Assemblymen and also complicit in this particular thing, they manage to smuggle these tress or lumber through other ends and they land at the ports for same to be exported.”

A major destination for the lumbered rosewood is China.

Rosewood is highly valued outside Africa where the wood is used for antique-style furniture and building of Yachts among other uses.

This explains the increased presence of Chinese engaging in illegal felling of the tree in Ghana with the support of locals.

The sector minister had conceded security officials and other stakeholders were complicit in the illegal activity.

Asomah-Cheremeh said “We cannot say that the security officers are saints in these circumstances.

But we implore these security officers to assist…some Assemblymen and also complicit in this particular thing, they manage to smuggle these trees or lumber through other ends and they land at the ports for same to be exported.”