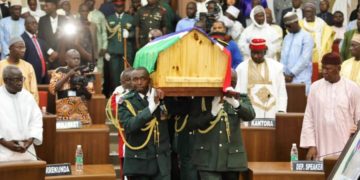 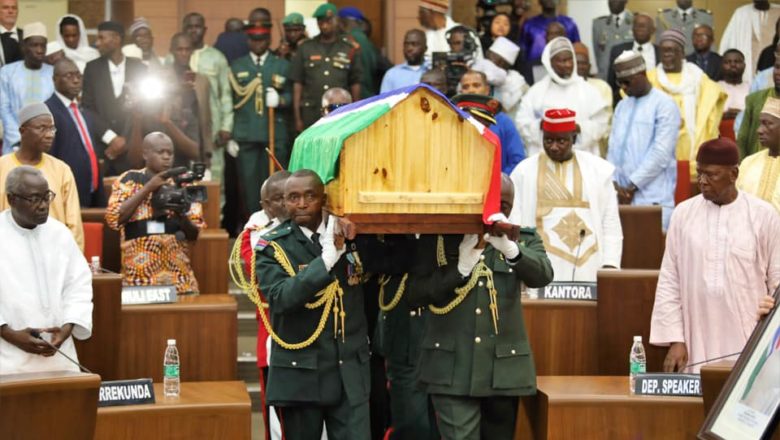 Former Gambian president Sir Dawda Jawara has been laid to rest after a state funeral at the National Assembly on Thursday.

His funeral was attended by thousands of Gambians including the country’s President Adama Barrow.

Jawara died on August 27 after a brief illness at the age of 95 at his resident in Fajara.

Seven days of mourning was declared in his honour. He was buried at the premises of the national assembly.

Jawara’s two wives Lady Chilel Jawara and Njeme Jawara were both in attendance at the funeral.

President Adama Barrow in his tribute said ‘’Sir Dawda set the foundation for the country and he led us through independent and he lay strong institutions for the country.

He was tolerant and a true democrat, this is a big lost to the nations.’’

Dawda Jawara Jr, the eldest son of the former president described his father as honest and caring.

In 1965 the Gambia became independent after Jawara led them to freedom from British rule. He was knighted in 1966.

Kairaba Jawara became the president of the republic of the Gambia in 1970.

In 1981, he survived an attempted coup led by Kukoi Samba Sanyang who succeeded for two days but with help from neighbouring Senegal the coup was aborted and later that year the Gambia joined the confederation which ended in 1989.

His government was later overthrown in July 1994 by Yahya Jammeh.

Jawara fled into exile and was living in the UK but in 2001, ex-leader Jammeh granted him amnesty, allowing him to return to The Gambia in 2002.

The culinary entrepreneur settling the Jollof battle in West Africa